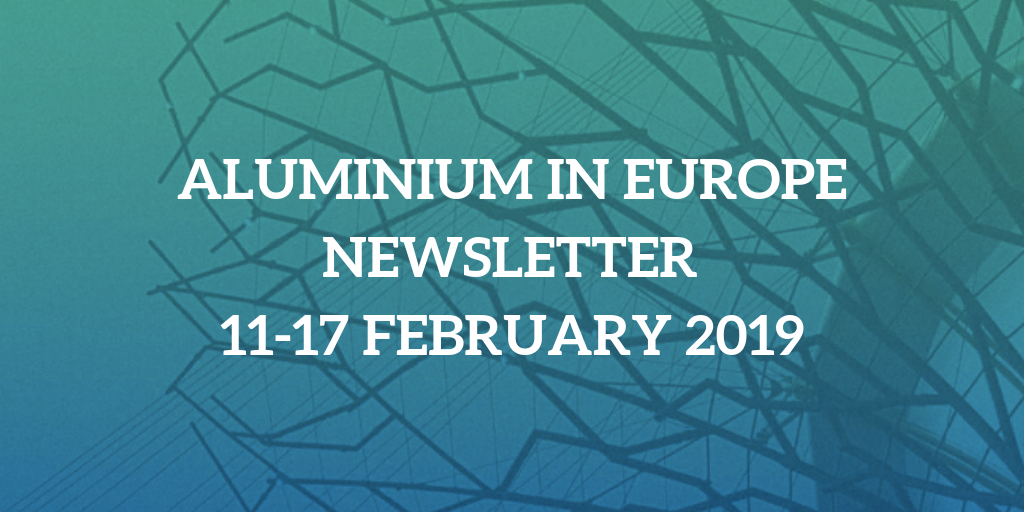 Among the latest main news: the EU might face an uncertain year with discouraging economic figures and a threat of U.S. tariffs on European cars, an aluminium smelter reopens in the Netherlands after six years of idleness, and Austrian AMAG inaugurates a new facility. In the world, South32, Arconic and Alba release their annual results, China’s is breaking new aluminium exports records, and Iran is increasing its aluminium production. In other news, analysts predict growing aluminium deficit and stable aluminium price this year.

Discouraging Economic Figures In The EU

Asking if a European recession is underway, a Telegraph article brings attention to recent economic data from Germany and Italy. German industrial output saw a sharp fall in December due to falling car sales triggered by changes in emission standards while manufacturing orders went down 7 per cent year-on-year in January. Meanwhile, in Italy, per capita income growth is at disastrous levels, having dropped by 4 per cent over the last 20 years. Slowing economic growth is thus becoming a certainty this year.

At the same time, President Donald Trump has been reportedly told that European cars and auto-parts imports are hurting US national security. This Sunday, President Trump received a U.S. Commerce Department study on car imports and the findings (still to be made public) could lead the U.S. to impose tariffs on European car imports.

AMAG – the biggest company in the Austrian aluminium sector – officially commissioned its new cladding facility, the company announced last Monday. The facility is a fully automated cladding station for multilayer material composites made of aluminium to meet demands from customers in the heat exchanger and aviation industries. The facility is part of AMAG’s plant expansion project with the company also constructing a new cold rolling mill among other things.

The Dutch company Aldel announced the reopening of a potline after a six-year long closure. The company returns to the European aluminium industry following the purchase of the business by York Capital in 2017 and plans to move towards full production by the end of this year. The company cited strong support from customers and suppliers as the reason for its return to the market.

Higher sales volumes last year helped the American value-added aluminium company Arconic increase its revenues by 8 per cent year-on-year. In 2018, Arconic raised US$14.0 billion in revenue compared to 2017’s net loss of US$74 million. Earlier this month, Arconic announced that it would separate its business into two companies to optimise shareholder returns. The company is also considering the sale of portfolios that do not fit into engineered products & forgings or global rolled products. Arconic also announced a US$100 million expansion project at its plants in Tenessee. The plant will receive new downstream equipment to manufacture industrial and automotive aluminium products.

Alba – Aluminium Bahrain – released its fourth quarter and full year figures showing its annual net income falling by 35 per cent, from US$245.9 million in 2017 to US$158.9 million in 2018. While the company benefitted from rising sales volumes, its financials were hurt by “unprecedented spike” in alumina prices in 2018. At the same time, Alba reached a historic milestone exceeding the 1-million metric tonnes production mark, and the company’s flagship Line 6 project was delivered ahead of schedule in mid-December.

Iran’s Aluminium Production On The Rise

A group of scientists developed a new aluminium alloy using microscopic diamonds that could see commercial use in maritime transport. The researchers from the UK and Russia collaborated to synthesise alloys with nanodiamonds making a new, smoother, defect-free and superior-quality alloy. These new aluminium allows could also be used in aerospace, automotive and other industries that could benefit from high strength, low density properties of the innovative alloy.

The global aluminium market will remain undersupplied over the next few years, reports Fitch Solutions in its new aluminium supply and demand outlook. Fitch forecasts that aluminium production growth will be unable to catch up with growing demand coming from the construction and automotive sectors. The market will therefore experience consistent deficits from 2019 to 2023 with declining stock-to-use ratio. The automotive and aerospace sectors will choose aluminium over steel as a more environmentally friendly option.

Fitch also predicts that China’s aluminium growth will slow down in the coming years due to the growing issues of air pollution and increasing operating costs of aluminium plants. Meanwhile, aluminium integration will proceed in the U.S., the EU and Japan, while developing markets such as India will offer growing opportunities.

The global #aluminum market will face deficits in the coming years, as a result of demand growth from the automotive and construction sectors against production growth https://t.co/z341cenW6L

With the lifting of Rusal sanctions, premium weakness and easing cost pressures, the global aluminium market will not see falling prices in the near future, according to ING’s economic analysis. Firstly, while Rusal’s metal is back on the market, the ex-China market will still see a significant deficit this year. Secondly, premiums remain fairly weak across the world except for the U.S. where the 10 per cent aluminium tariff supports premiums. Thirdly, while smelters’ margins were getting squeezed as producers are seeing rising costs of energy and alumina in 2018, this year is offering more clarity. Rusal’s alumina supply has eased, the Alunorte refinery is expected to return to full production, and China – encouraged by attractive prices – has turned from an importer of alumina to an exporter. And yet, the ING analysis points out to a structural issue in the aluminium market: China’s growing hegemony in the global aluminium market. Despite environment-related production cuts, China is behind the current supply growth while aluminium smelters in other countries cannot fill the existing deficit.

Which developments will affect the #aluminium market this year? Analysis by ING Economics https://t.co/P8BnXvb5SB pic.twitter.com/jjASxg4wDQ

Unwrought aluminium and semis exports from China broke a new record in the first month of this year, according to China customs data. Chinese smelters exported 552 thousand metric tonnes last month compared to December’s total of 520 thousand metric tonnes. The record increase in exports is happening in spite of the Section 232 10 per cent tariff on all imported aluminium and compulsory government-mandated winter curtailments to curb air pollution across China. At the same time, China experienced a sharp increase of 24 per cent in bauxite imports last year. Chinese refineries have also started getting used to the new reality of imported bauxite ore by adapting their refining equipment to process bauxite coming from overseas.

Canada Puts Pressure On The U.S. To Drop Metals Tariffs

Canada remains strongly opposed to the U.S. tariffs on steel and aluminium despite its domestic ratification of the UMSCA trade deal, said Canadian Foreign Minister Chrystia Freeland in a meeting with U.S. House of Representatives Speaker Nancy Pelosi on the margins of the Munich Security Conference. “The Canada position is now that we have concluded (USMCA) that is all the more reason why the tariffs must be lifted,” stated Freeland.

The U.S. tariffs exclusion process for importers of steel and aluminium reveals some interesting findings, points out Fastmarkets’ Andrea Hotter. While the Section 232 tariffs were introduced on the premise of national security, the U.S. is theoretically becoming reliant on Japan for its steel and Saudi Arabia for its aluminium given the high volumes of exclusions these countries were granted by the US Department of Commerce. In aluminium, U.S.’ traditional supplier – Canada – is still waiting to hear on 97 per cent of its total applications for relief (with similar patterns for Russia and the UAE), while China has been granted exclusions for volumes of 86 per cent of its 2017 import levels. China has thus moved from the fourth-largest US aluminium supplier to the second-largest.

Exclusions from Trump tariffs: to date, Canada, Russia, the UAE & Bahrain combined have won approval to ship just 5.3% of the amount for which China has been granted exclusionshttps://t.co/2eihU0vrwm