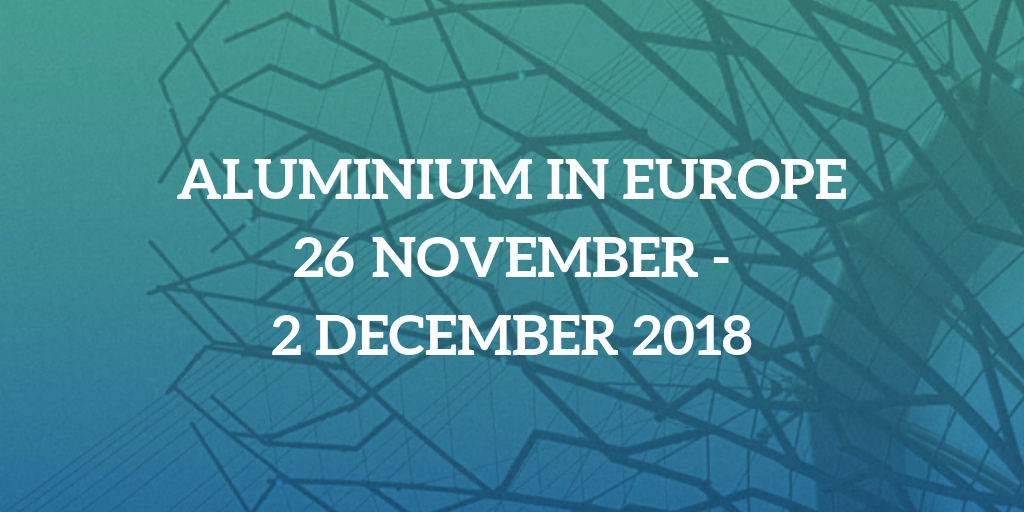 As it continues to expand its automotive footprint in the Eastern European market, Constellium opened its new Automotive Structures facility in Zilina – Slovakia. The new plant employs 90 people and is dedicated to the production of aluminium Crash Management Systems and Body Structure components.

Greece’s largest alumina refinery operator anticipates a rise in sales from 1.5 billion euros this year to 2.2 billion euros in 2019 thanks to its growing alumina business and new projects in Libya and Guinea. Mytilineos faired well despite the protracted economic crisis in Greece thanks to overseas expansion and investments in new equipment to halve production costs.

European Aluminium welcomed the European Commission’s new plans to secure a long-term decarbonised economy by 2050. “Our industry is working for many years to put efficiencies, incremental and breakthrough innovation in action,” said Gerd Götz, European Aluminium’s Director General. The aluminium association plans to unveil by the end of the year a new strategy outlining the industry’s contributions to the on-going decarbonisation process.

We welcome the European Commission’s new plans to secure a long-term decarbonised economy by 2050!

German aluminium producer Trimet cut ingot production by 10 per cent at its smelters in response to tight global alumina supply, but has replaced the raw material with scrap to maintain aluminium product output. The company expects to resume to full capacity in the first months of the coming year.

Trade Tariffs And Sanctions Could Hamper Aluminium Demand in 2019

While still rising, aluminium demand growth could slow down in the coming year due to trade sanctions and tariffs, opined Norsk Hydro’s President and CEO Svein Richard Brandtzæg. Speaking at the Capital Markets Day 2018, Hydro’s chief said that aluminium continued to be the world’s fastest growing base metal and there would be a continued deficit in the global primary market. Talking about Hydro, Brandtzæg stressed that the company’s immediate goal was to resume full operations at Alunorte refinery in Brazil.

EVP John Thuestad ⁦@NorskHydroASA⁩ Capital Markets Day in London presenting the path forward for our bauxite and alumina business in Brazil. We have the best organisation in place and eager and ready to bring back capacity when the embargo is lifted. pic.twitter.com/iFtDT8Bfwn

Africa’s leading beverage packaging company Nampak is ramping up production of aluminium cans to respond to consumers’ global retreat from plastic. “Consumer sentiment against plastic packaging that cannot be recycled is very clear,” said company’s CEO Andre de Ruyter. “Aluminium is a valuable metal and so people have incentive to recycle it.”

A researcher in India developed a method for small plants to recycle aluminium scrap using their existing infrastructure. At the moment, large plants produce most ingots and the new method will allow smaller companies to enter the market by producing quality ingots.

Global aluminium association leaders from the EU, Brazil, Canada, Japan and Mexico issued a joined letter to leaders of the G20 calling for renewed commitment “to tackling the issue of market-distorting aluminium overcapacity.” The aluminium associations expressed their concern about state subsidies disrupting the equilibrium in aluminium trade and called on the world’s leaders to address such unfair practices.

China’s export of alumina soared to 460,000 tonnes last month – the highest monthly export total since 2014. Historically a net importer of alumina, China’s alumina is in demand due to shortages in the global markets caused by an outage at Norsk Hydro refinery in Brazil, a now resolved strike at Alcoa’s facility in Western Australia and the impending U.S. sanction on Russia’s Rusal.

Indian domestic aluminium producers are floundering in domestic sales due to a rising tide of low-cost aluminium imports from China. Experts attribute blame to the intensifying trade war between the U.S. and China. At the same time, the domestic producers are facing rising cost and lower availability of coal used to power the sector’s plants.

China Hongqiao Group has been ordered to cut up to 550,000 tonnes of annual smelting capacity this winter. The world’s largest aluminium producer’s annual capacity amounts to 6.46 million tonnes and the cut represents 8.5 per cent of Hongqiao’s capacity. Analysts points out that this year’s closure point to relatively lenient winter curbs compared to last year.

The Russian government issued a decree allocating up to 10 billion roubles – $149 million – to buy up to 50,000 tonnes of aluminium for the state reserve. The one-off move would shield sanctioned aluminium producer Rusal. The company’s shares rose 2 per cent on the news.

600 Delegates From 25 Countries Participates In ARABAL 2018 In Kuwait

ARABAL – the Middle East’s leading aluminium event of the year – took place in Kuwait with ARABAL Chairman Mr Mohammed Al Naki concluding: “The GCC has been looking for ways to diversify its industry and income and aluminium is now a key sector for the region. When we started ARABAL 35 years ago there were only three smelters and production was extremely low. Now we have 6 smelters and aluminium production has increased to 10% of global output.”

Three U.S. senators signed an open letter addressed to the Federal government to petition for a formal review of the Section 232 aluminium and steel tariff exemption. The trio pointed out the growing backlog of requests for exemptions and the involved administrative burden the American business are facing when they try to secure their supplies.