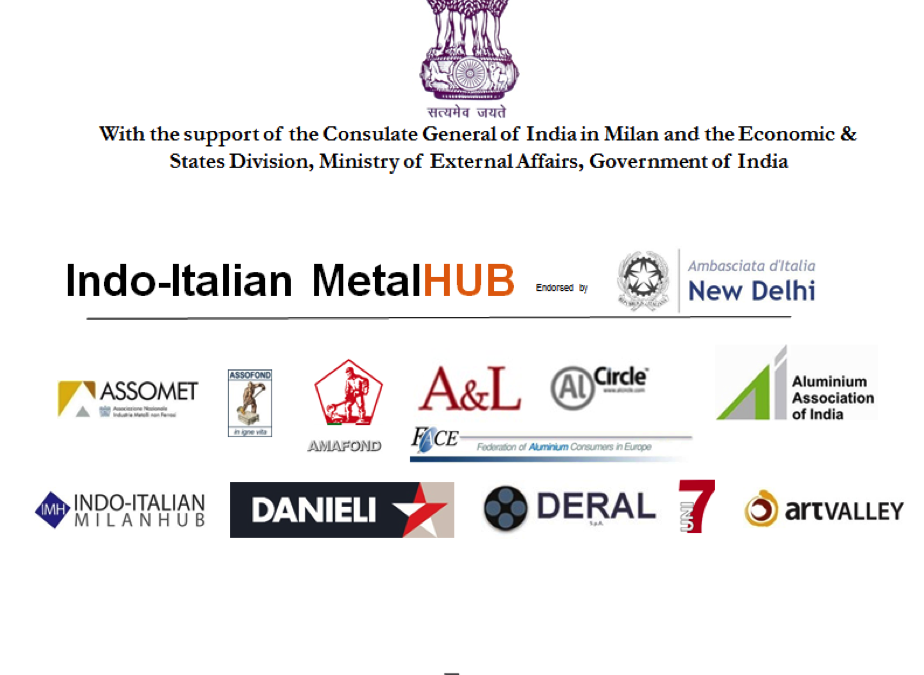 The platform for synergies for cooperating with India mainly in the aluminium industrial sector: research, development and the industrial districts of Italy and India, the question of the European customs tariff on unwrought metal.

India is an important, fast-growing country; the country has emerged the fastest growing major economy in 2016 despite it being a middle-income developing country with persisting pockets of poverty. The economic and structural reforms started in 1991 have since been a continuous process propelling the Indian economy on a trajectory of consistently high growth rate and imparting a dynamism which has attracted the best companies from across the world to invest in India. GDP is estimated at US$ 2.26 trillion for 2016-17 at current prices, the real GDP grew at 6.9% per annum during the 5-year period ending 2016-17.

Regarding the aluminium industry, the very dynamic picture of the flow of primary metal worldwide should be noted as a significant element; in this context India is an exporting country, therefore it is very important for the entire European area which is known to be always in short supply for this metal. In terms of complementarity, the foreseeable demand on the part of the Indian downstream system of cutting-edge plants and technologies should not be underestimated; Europe and especially Italy are well equipped with such a know-how.

Trade relationships between Italy and India, which are already very good, could develop further with a closer cooperation in numerous segments, and among these there is undoubtedly the industrial chain of aluminium, given that the Italian and Indian systems are strongly complementary.

Considering for instance the high energy costs in Europe, it is clear that the Old Continent and consequently Italy has a greater interest in focusing on the improvement of the technological standards of the light metal’s downstream, which are already high, rather than invest on smelters, thereby reaffirming a guiding role in the development of increasingly efficient technologies for the aluminium processing and foundry systems and for downstream uses, a precise reference point for the growth of downstream in India.

The importance of developing wide-range relationships between the two Countries provided the inspiration of the the Indo-Italian MetalHub event, a project for defining cooperation in research and development between the industrial districts of Italy and in India, with a dedicated attention to the aluminium industrial chain.

The second phase of the Indo-Italian MetalHub will be held in Milan on the 2nd of July at Palazzo Lombardia under the auspices of the Regione Lombardia; the Project, born in 2017 and continued in 2018, was organized by ArtValley and A&L Magazine, with the support of Danieli&C and the official endorsement of India’s Ministry of External Affairs (Economic & States Division), of the Italian Embassy in New Delhi in India, of AAI the Aluminium Association of India, of the Government of Odisha and the major Italian metallurgy associations Amafond, Assomet and Assofond.

The institutions that have collaborated with the project are:  METEF, FACE (Federation of Aluminium Consumers in Europe), the Indian Embassy in Rome, the Italian General Consulate of Kolkata, FICCI, Al Circle, FOSMI (Federation of Small and Medium Enterprises India), DITECFER (District for Rail Technologies, High Speed, Safety & Security).

The possible trade relations between Italy (and Europe in general) and India in the aluminium segment must consider important market issues, it is known since a long time that the situation of EU aluminium users is at risk, not just for the broadening of the divide between production and demand of primary metal, but also for the European customs tariff on unwrought metal. Many opportunities exist for generating adequate partnership facilities.

In terms of tariffs and logistics world nowadays it’s a single competitive platform, this has to be understood in volumes and possibilities, and concerned authorities should look for balanced solutions accordingly, the two regions – Europe and India – must work in close collaboration in the aluminium sector with each other to break down barriers to the movement of technologies (to India) and surplus metal (to Europe) and support deeper integration into the global supply chains. This is certainly not an easy task but it can definitely be done.

9:00 INDO-ITALIAN METALHUB The platform for synergies in the metal sector

Presentation by Attilio Fontana, President of the Lombardy Region

Panel 2. Geopolitical components. Solutions and proposals for the tax wars and the East and West interchange

Panel 4. Technical-cultural synergies between the Indian and Italian industrial systems. Aluminium in the food industry, in the advanced projects and beyond