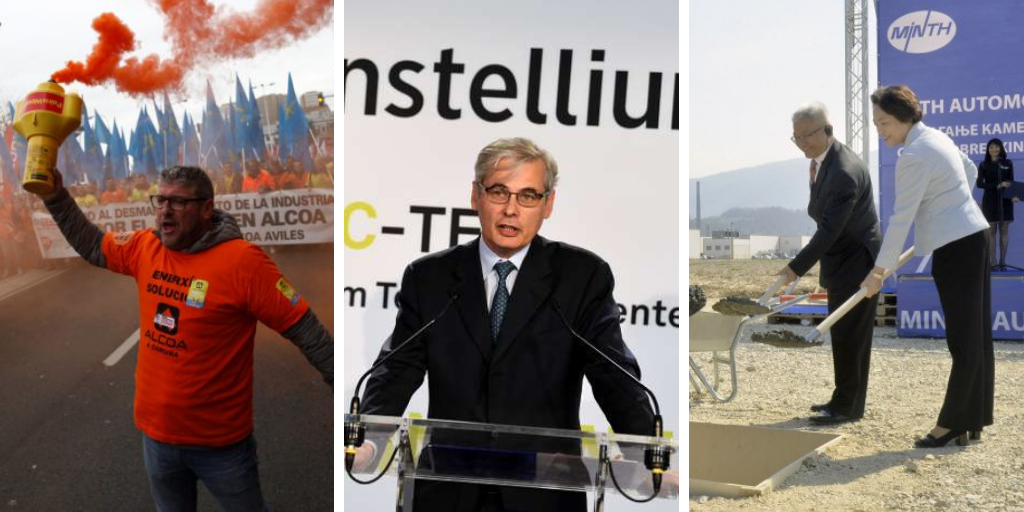 Among the latest main news: Chinese investment firm is building an aluminium parts factory in Serbia, Norsk Hydro’s Karmøy plant suffers a power failure, and Aludium announces organisational changes. In the world, India could extend anti-dumping duties on aluminium alloy wheels from three nations, and American aluminium leaders claim that the US tariff on aluminium imports is failing to address Chinese overcapacity.

The recent closures of Alcoa’s Spanish aluminium plants should be the wake-up call for the European Commission to radically revise its out-dated trade and industrial policies, writes FACE’s Secretary General Mario Conserva. Domestic primary aluminium production satisfies only around 30 per cent of total consumption in the EU, making the trading bloc reliant on imports to keep the thousands of SMEs in the downstream sector supplied. Meanwhile, European SMEs importing unwrought aluminium have to pay a 6 per cent tariff. This tariff represents artificial costs, which are harming the competitiveness of European companies while doing nothing to stave off the decline of primary production in the EU.

To be fair, the EC could have done little to prevent their closure. https://t.co/VjR4zgaZhD

From the beginning of April, Aludium has a new management structure. Markus Plakolm is promoted to Vice President of Manufacturing reporting directly to the CEO of Aludium – Arnaud de Weert. Plakolm replaces Mick Wallis, Executive Chairman who returns to the US. Alberto Ruiz succeeds Markus Plakolm as Director of the Amorebieta plant leaving his position as Director of the Alicante plant. José Ignacio Juan Planelles is taking over from Ruiz to manage the Alicante plant.

Hydro Karmøy plant suffered a power failure last week leading to disruptions in the primary aluminium production. The outage affected 45 pots, representing 10 per cent of the plant’s total production capacity. While the plant re-established supply of electricity and customer impact is expected to be limited, the company estimates that it will take time to return to the usual levels of aluminium production.

Seeking to maintain a level-playing field and ensure fair trading practices between foreign producers and domestic manufacturers, India’s Commerce Ministry recommended extension of import duty on aluminium alloy wheels from China, Korea and Thailand for another five years. Despite the existing measures, the ministry claims that aluminium alloy wheels are still imported at artificially low prices and the removal of the export duty would further disadvantage domestic manufacturers.

Constellium is proud to support Blue Origin's massive orbital rocket New Glenn. It's a new milestone for the supply of high-performance Airware® products for the #Space industry.https://t.co/DDEn5GAuXr pic.twitter.com/8nGVeZwuFa

With its pioneering recycling initiative – REALITY project – Jaguar Land Rover will recover aluminium from existing cars and reform it into new high-grade aluminium to build new vehicles. The process is currently being tested on early, pre-production Jaguar I-PACE prototypes. The company hopes to make a viable business case for using recycled aluminium within its own facilities. JLR currently uses 180,000 tonnes of aluminium per year.

The REALITY Project: the next phase of our aluminium closed loop strategy with an innovative recycling initiative to transform the vehicles of today into the cars of tomorrow. Find out more: https://t.co/OsRLyi3gsM#ProjectREALITY #Recycle pic.twitter.com/1OBrryngJj

ELYSIS To Set Up Research Centre In Canada

ELYSIS – a joint venture between Rio Tinto and Alcoa – announced the site for its new research and development centre in facility in the Saguenay–Lac-Saint-Jean region in Québec. Over 25 experts will work from the second half of 2020 on the site to commercialise by 2024 an innovative technology that eliminates all direct greenhouse gases from the traditional smelting process.

Russia’s leading aluminium producer Rusal announced an ambitious pledge to plant over one million trees in Russia. The initiative is part of the company’s climate strategy to reduce its carbon footprint and represents Russia’s largest ever forest restoration project. In addition, Rusal signed an agreement with a Russian technology company Tiocompsite to test a new technique to produce sulphur concrete using red mud. Sulphur concrete is an innovative material that can be used to make a variety of building materials, including pavement slabs, kerb stones, drain channel trays, and gravel.

Nespresso Encourages Other Coffee Makers To Join Its Recycling Scheme

Nespresso invited its competitors to join its global scheme to recycled used aluminium coffee capsules. The company said it seeks to improve the accessibility and convenience of recycling aluminium coffee pods. While public recycling infrastructure is currently unable to process such small light items, Nespresso developed its own programme in the UK allowing coffee drinkers to return their used – but fully-recyclable – coffee capsules.

Swiss packaging company SIG Combibloc Group AG became the world’s first provider of aseptic carton pack made from aluminium certified by the Aluminium Stewardship Initiative. The certification allows the company to work towards its aim of using only raw materials that are sustainably produced. Norsk Hydro, on the other hand, received ASI certification for its aluminium rolled products. “Aluminium rolled products reach a wide variety of downstream industries, and ASI is delighted to see this important sector growing its uptake of ASI Certification,” commented ASI’ Chief Fiona Solomon.

Chiefs from Alcoa, Constellium, JW Aluminium and Scepter discussed the impact of Trump’s tariffs and duties on domestic prices and their effectiveness in tackling Chinese overcapacity.. “Not all tariffs are created equal,” said Constellium’s CEO Jean-Marc Germain. Germain mentioned that antidumping and countervailing duties “have proved to be extremely effective against unfairly subsided imports of Chinese aluminium.” However, he added “we cannot point to a similar record of success from the Section 232 tariffs…unfortunately, so far the tariffs have done nothing to stop China’s trade distorting behaviour in the market.” Germain concluded by saying that Trump’s tariffs are increasing the costs domestic products making from aluminium making them less competitive globally.