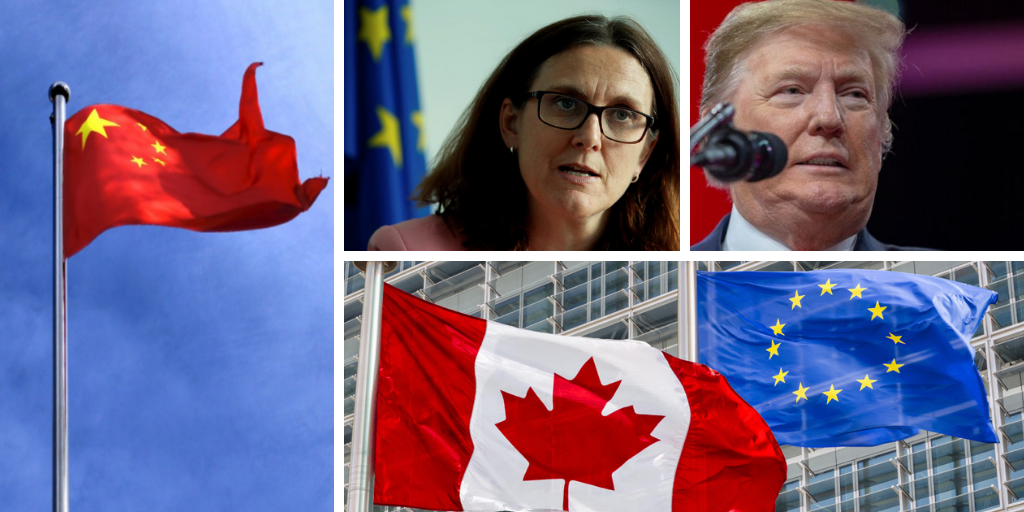 Among the latest main news: Canada’s aluminium exports to Europe skyrocketed last year after the US imposed extra duties on foreign aluminium, European aluminium foundry premiums and ingot price are under pressure due to weak demand in the automative industry. In the world, American Aleris is beating records thanks to favourable domestic environment, and the Trump Administration is in no rush to lift duties on its allies despite the US trade deficit spiralling out of control. In sustainability news, aluminium use is set to increase further in transport, including a new bike by Škoda.

Canada Aluminium Exports To EU Rocket After US Tariffs

Exports of primary aluminium from Canada to the EU have skyrocketed since the U.S. passed the Section 232 tariffs on steel and aluminium imports. Canadian exports to the EU are expected to increase further this year if the US – Canada’s traditional market – does not lift the tariff.

Continuing weak demand in the automotive industry pushed down aluminium foundry premiums in the EU and the US, reports Fastmarkets MB. While foundry premiums fell 5 per cent in Germany month on month, the fall from the beginning of this year is now more than 16 per cent. “It’s a poisonous combination of reduced demand slightly with increased supply – it’s the worst situation to be in,” a trader said to Fastmarkets MB. At the same time, European aluminium ingot prices fell to its lowest level in three years this month leading to a sizeable decrease in scrap prices.

The Bucharest Stock Exchange will include ALRO – one of the largest vertically integrated aluminium producers in Europe based on capacity – into its benchmark BET index and BET-TR index from March 18. ALRO currently has a market capitalisation of around 352 million euros. ALRO’s shares traded 9.35 per cent higher at 2.48 lei after the announcement. ALRO’s major stakeholders Vimetco and Conef recently launched a secondary public offering of their ALRO stocks.

The American rolled aluminium producer Aleris published its fourth quarter and full year results for 2018 showing record results in volumes and revenues. The company attributed its positive results to increases in domestic demand and favourable metal environment in North America. The firm also experienced a growing interest from the aerospace industry. Aleris expects these trends to continue into this year.

Bahrain’s ALBA announced that its Line 6 Expansion Project was brought to 50 per cent capacity. The company expects to see positive financial results as well as increase in its bottom-line from the ramp-up. The expansion is one of the region’s biggest infrastructure projects with an overall investment of over US$3 billion. Once completed later this year, the annual capacity will reach 1.5 million tonnes.

Seeking to expand its coverage of the aluminium market from upstream to downstream and bring more visibility to the aluminium cost curve, Fastmarkets proposed to launch seven new aluminium prices, including calcined pet coke, extrusion and flat-rolled product assessments.

Bauxite residue could soon find new life as a building material replacing sand and clay-based products thanks to research partnership between UAE’s Emirates Global Aluminium and the European research and technology organisation VITO NV. With around 150 million tonnes of bauxite residue produced annually around the globe, less than two per cent is presently put to use.

The Swiss coffeemaker Nespresso will invest US$1.2 million into NYC’s aluminium recycling efforts, supporting the city in its Zero Waste Initiative – a plan to reduce NYC’s contributions to landfills to zero by 2030. In addition to aluminium coffee capsules, the programme will include the collection of general discarded aluminium, including foil and packaging. Nespresso’s contribution will improve the city’s non-magnetic household recycling process.

The electric vehicle market will gain more prominence in the future as prices for EV batteries is falling in line with consumer and environmental demand, argues E.ON. New batteries and ultra-fast charging stations are set to revolutionise charging practices around the world. New consumers will also be able to charge their cars at home thanks to more attractive deals from energy suppliers. 40 million EVs are expected to be on the road by 2030, leading to a ten-fold increase in aluminium demand, according to an analysis from CRU Group.

Researchers at the Brunel Centre for Advanced Solidification Technology (BCAST) at Brunel University are working with Constellium to capitalise on aluminium’s recyclability and develop next generation of high performance aluminium alloys. The new alloys will be used in lightweight vehicle construction, reducing vehicles’ weight and carbon dioxide emissions.

As miners are looking to contribute to a low-carbon economy, Rio Tinto and Alcoa teamed up with Apple last year to commercialise a smelting project that emits oxygen instead of greenhouse gas emissions. Unveiling its Amrun bauxite mine equipped with the new technology in northern Australian last Friday, Rio Tinto’s Chief Jean-Sebastien Jacques said the company was in talks with Apple to move into the next phase and focus on aluminium supply chain transparency.

Hydro’s technology pilot in Karmøy is one of six nominees for a Green Award in the category “Innovation of the year”. The project aims to verify at an industrial scale the world’s most energy and climate-efficient technology for aluminium production. The award ceremony will take place as part of the Green Tech Festival 2019 in Berlin on May 24.

Klement – Škoda’s new electric two-wheel concept – could revolutionise urban mobility with its electric, innovative and modern approach. The Czech carmaker showcased the innovative bike at the Geneva Motor Show and will target younger generations who are environmentally aware and want to experience new ways of getting around big cities. The KLEMENT has a futuristic aluminium frame with a weight of 25 kg making it easy to manoeuvre and further enabling its recyclability.

Aluminium Price Down As Investors Worry About Demand In China

Aluminium traded lower last week due to weaker than expected demand on the aluminium market in China. China – the top aluminium consumer in the world – is worrying investors as demand is slow to pick up after a period of national holidays.

Exports of aluminium from China stood at 343,000 tonnes in February – down by 37.9 per cent from January’s record high of 552,000 tonnes. The exports are now at their lowest since February 2017 despite customs data suggesting that exports went up 9.7 per cent year-on-year. At the same time, China’s alumina production saw a year-on-year increase of 10.93 per cent. The increase is attributed to easing of bauxite supplies and excess production. Moreover, Chinese exports of aluminium alloy wheels went up 11 per cent year-on-year in January. Aluminium wheel exports started climbing last August when the US announced a 10 per cent duty on Chinese allow wheels. The US accounts for half of Chinese exports, making it China’s biggest imported of aluminium allow wheels.

Mexican government wants the US to remove its tariffs on Mexican imports of aluminium and steel before it ratifies the newly negotiated USMCA trade agreement. Andrés Manuel López Obrador, the newly elected president wants to enhance the position of Mexican workers on the North American labour market. “We have many things to do but we want to take it slowly because it is very important to have it in a very good way for Mexico,” commented a government official.

The US trade deficit with other countries reached a decade high of $621bn last year undermining one of the President Trump’s trademark policies. Claiming that the US was “ripped off” by other countries, President Trump imposed a number of tariffs on its trading partners including a 10 per cent duty on aluminium. While the US and the EU reached a truce last summer, the European car industry is worrying about potential tariffs on European cars.

No Comprehensive Deal With The US – Trade Commissioner Malmström

EU’s officials held talks with their American counterparts on reaching a trade deal between the EU and the US. The EU’s trade commissioner Cecilia Malmström said that the trust between the trading blocs had been eroded by President Trump’s tariffs on steel and aluminium, and the Union would not therefore support a TTIP-style comprehensive deal. Instead, the EU will work on a more focused deal on industrial goods and cars.

EU will seek narrower deal with US focused on industrial goods & automobileshttps://t.co/nVmrePJKse