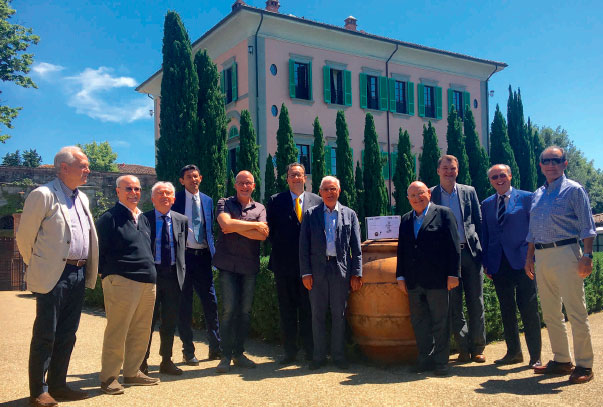 The Federation of Aluminium Consumers in Europe continues its battle, working with Rome’s LUISS University on the second phase of the large study dedicated to the competitiveness of the light metal’s downstream in the EU.

FACE, the Federation of EU Aluminium Consumers, founded in 1998 by 42 members from 8 European countries, celebrated its first twenty years of activity with a special event held on June 22nd-24th in the prestigious Borro estate, a medieval town in the heart of Tuscany’s Apennines between Arezzo and Florence. With a large attendance by members, the general assembly held on June 23rd defined the structure of the federation which for the next two years will be the following:

As we know, FACE was founded specifically to lobby Brussels for suspension/elimination of the 6% duty on raw unwrought aluminium, a global commodity, and excluding China, priced around the world at a LME base price plus regional/product premia, directly linked through logistics costs and the respective regional aluminium demand and supply situation. LME daily quotations do form a common global price base, and regional premiums would reflect a logistical difference related through arbitrage if the situation were that of a normal market condition. But it is not, tariffs constitute a form of subsidies to the benefit of some big companies (including non EU-based companies in Norway and Iceland), causing extra-costs to the downstream industry, and threatening the competitiveness of hundreds of companies, involving more than 230,000 jobs in the EU. None of these are new facts, they have repeatedly surfaced to impact EU semi-fabricators aluminium pricing over the past 30 years, ever since the very beginning the crucial issues for FACE’s activities were the following:

• What is the trade policy of the EU for aluminium products?

• What is the impact of import tariffs on the EU market price for unwrought aluminium?

• What is the impact of EU trade policy on the competitiveness of downstream transformers?

In order to provide a reply to these questions, following an initiative by FACE, Rome’s Luiss University carried out in 2014 an in-depth survey to evaluate in detail the impact of EU policies on the competitiveness of downstream transformers in the aluminium industry, and the conclusions were that the EU lacks metal, this scarcity increased extraordinarily during the past few years because producers totally or partially relocated smelters elsewhere, proving that the subsidy hidden by the tariff served no purpose other than causing a hefty 15 billion euro worth of damages between 2000 and 2013 to the industry’s downstream, the most consistent part of the value chain both in terms of revenues as well as of the number of employees. In order to understand concretely the seriousness of these figures, it should be underlined that the average extra-cost for every aluminium tonne consumed by semis producers in EU is of about 120 Euros.

The situation today got even worse, if possible, the EU28 primary aluminium production is more and more declining, the EU lost more than one quarter of its smelting capacity in the period 2008-2016 because of a profound process of disinvestments and resulting several smelter closures, some primary aluminium producing countries, such as Italy, Netherlands, and UK have definitively ceased or drastically reduced their production in the last few years, according to the European Aluminium, the number of smelters in operation in the EU decreased by 38% in the period 2002-2016. Notwithstanding this, it is still hampered by a tariff that will continue to hinder the competitive strength of the EU downstream and to obstacle better relations with natural suppliers for EU aluminium transformers.

A further risk is to lose an extraordinary cooperation opportunity, in a market condition where EU transformers, extruders, rollers and foundry casters are looking for high quality metal for new alloys, mainly for automotive applications, such as structural die casting parts, body sheets and high strength profiles. Considering this situation, the celebration of twenty years of Face also coincides with the updating 2018 of the LUISS study, in order to provide the current strategic evaluation of the effects of EU Trade policy on the competitiveness of EU aluminium non-integrated downstream users, and to assess strategically the relative position of EU non-integrated downstream producers in the next future also in the light of Chinese companies’ strategies and the new US trade policy.

In this respect, the seriousness of the market situation which ended up being created in the EU during the past few months clearly shows that now more than ever it is important to safeguard the interests of the best part of the downstream system of the light metal in the EU: there are very little doubts as to the fact that the combined systemic effect of the new US 10% import tariff on aluminium, of the new trends of unilateralism, protectionism, rising trade wars, erosion of the multilateral system and the use of sanctions and of extra-territorial measures as an economic weapon and a substitute for diplomacy creates an unprecedented harm and risk to the survival of the EU downstream aluminium industry. The European Union has very few options to protect the system against such an existential peril, and there are no signs for de-escalation in the foreseeable future.