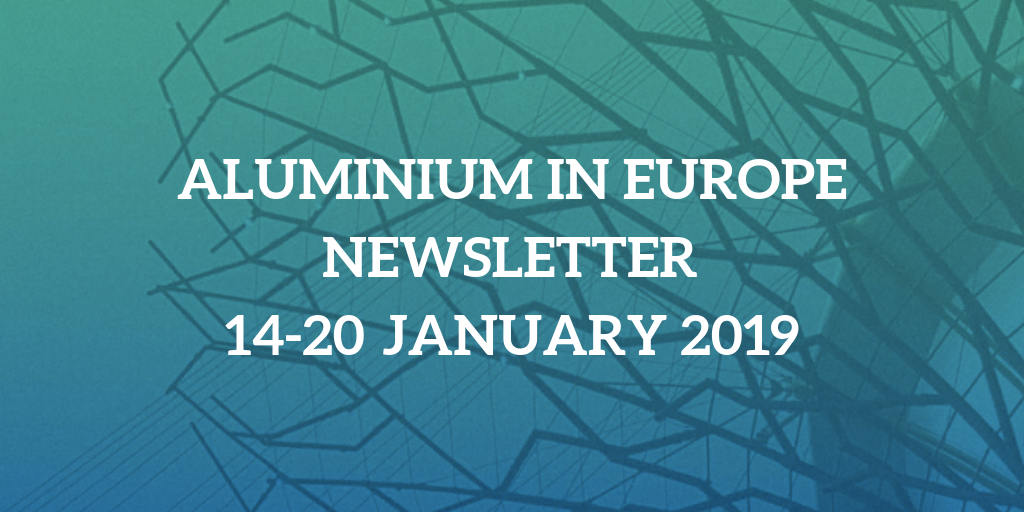 Among the latest main news: In Europe, Swedish aluminium producer Gränges joins Aluminium Stewardship Initiative. In the world, Rusal sanctions are expected to be lifted by the end of the month, Bahrain’s Alba is on its way to becoming the world’s largest aluminium smelter, and Vietnam is launching an anti-dumping investigation of aluminium products coming from China.

Swedish supplier of rolled aluminium products Gränges became the latest member of the Aluminium Stewardship Initiative (ASI). By joining the standards association, Gränges will now seek certification against the ASI Performance Standard for at least one facility or product line within two years.

The U.S. Senate rejected a proposal to keep sanctions on Rusal with senators voting 57-42 to end debate on the measure. Following the vote, the Treasury Department’s Office of Foreign Assets Control (OFAC) extended the sanctions deadline by another week to January 28 to allow Rusal to comply with the terms of the agreement reached with the Trump Administration.

Treasury officials pointed out that lifting restrictions on Rusal would ease the concern over ripple effects on companies in the U.S. and elsewhere. A junior minister in Ireland welcomed the news saying “workers at Aughinish Alumina in Limerick [controlled by Rusal] can breathe a huge sigh of relief.” At the same time, sanctions relief is expected to ease U.S.-Armenia aluminium trade.

Aluminium prices fell on Thursday after the vote, but analysts point out that the market will remain in deficit. On Saturday, OFAC sent a notice to Congress on its intent to terminate the sanctions. However, without an official announcement by OFAC, market analysts say it would be prudent to wait until January 28 for more clarity.

Alba Rising To Become The Largest Aluminium Smelter In The World

According to Alcoa’s chief executive Roy Harvey, the worldwide economic slowdown will lead to the slowest aluminium demand rate since the financial crisis of 2009. Harvey expects aluminium demand to grow by 3-4 per cent this year as the global economy is slowing down, resulting in compressed aluminium demand in key sectors such as construction, aerospace and automotive manufacturing. Alcoa released its latest numbers showing a 37 per cent earning drop compared to 2017, a more positive number that many analysts had anticipated.

Global demand for #aluminium will grow at its slowest pace since the global recession of 2009 – @Alcoa https://t.co/Fb7zB73lgo

The environmental agency of the state of Pará – where Hydro’s Alunorte alumina refinery is located – determined that the facility could now safely resume normal operations. Amid warnings that the Brazilian federal court must still act to lift the production embargo, Hydro pointed out that the environmental agency’s decision was a critical steps towards bringing Alunorte back to full production. Alunorte has been restricted to half capacity since last year over environmental concerns following several floorings in the area. The facility is a crucial part of the global supply chain of alumina.

Vietnam To Investigate Dumping Of Aluminium Products From China

The Vietnamese government decided to launch an anti-dumping investigation against certain value-added aluminium products imported from China. The Ministry of Industry and Trade said alloy or non-alloy rods, bars and products of other shapes coming from China have caused damage to domestic production, which is reflected in the decline in inventory and profit of local companies.

Vietnam will conduct an #antidumping investigation into #aluminium products imported from Chinahttps://t.co/EV72ZajnJ6 pic.twitter.com/OsXswePgYM

Albecour’s general manager, Pierre Boisvert, opined that the Section 232 tariff on imports of aluminium is harming not only Canadian producers, but also American buyers: “In reality, there were no winners in 2018 – US aluminium consumers needed to pay more [due to the tariff], while Canadian producers netted less because of it.” While Canadian primary aluminium exports to the U.S. progressively decreased from around 200,000 mt/month in 2017 to as low as 150,000 mt/month after the imposition of the tariffs, Canadian shipments to Europe rocketed from less than 5,000 mt in October 2017 to over 30,000 mt in October 2018. “Agreements signed between Canada and Europe allowing Canadian metal free of duties in Europe were key for this shift,” Boisvert said.

US #aluminium consumers needed to pay more [due to the tariff], while Canadian producers netted less because of it – Albecour's Boisvert https://t.co/vp8BGKCtaO pic.twitter.com/gElEWG08Qw

A hotel in Australia came up with an innovative idea to encourage local aluminium can recycling by introducing a recycling service while raising money for charity. Aluminium recycling is a key component of a sustainable economy due to aluminium’s infinite recyclability. Recycling aluminium uses only 5 per cent of the energy required to create new aluminium from bauxite.

What impact do sustainability and certifications have on the aluminium industry and how do companies profit from the Aluminium Stewardship Initiative? The German Association of the Aluminium Industry (Aluminiumverband – GDA) interviewed ASI’s CEO Dr Fiona Solomon to find out more.