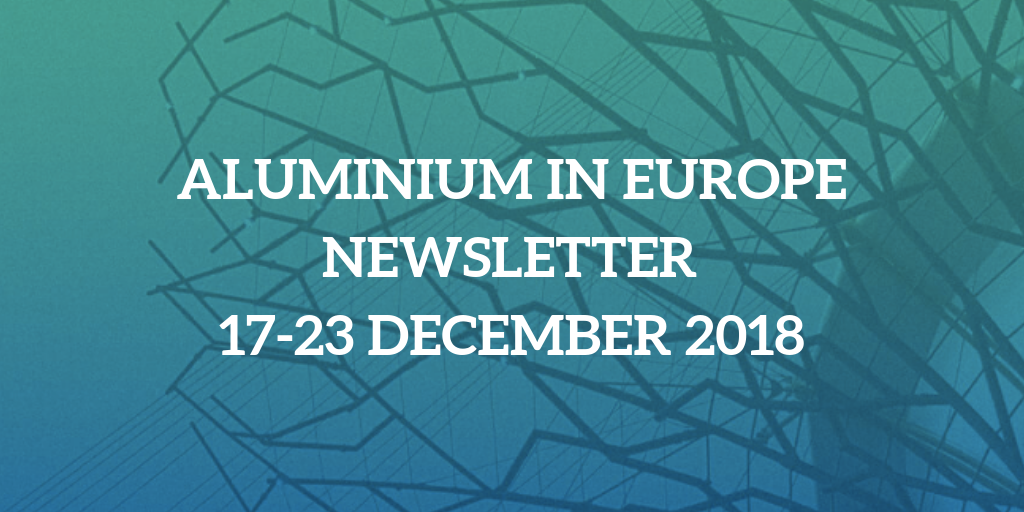 Among the latest main news: In Europe, European Aluminium reveals the name of the new chairman, Romanian aluminium smelter Alro’s majority shareholders sells its shares. In the world, the US Treasury proposes lifting Rusal sanctions, two Chinese companies are caught evading US tariffs, and aluminium producers in China decide to cut capacity.

Emilio Braghi – Senior Vice President and President of Novelis Europe – will replace Kjetil Ebbesberg (Hydro) as European Aluminium’s Chairman. Braghi has been appointed for a two-year term starting on 1 January 2019. At Novelis, Braghi was overseeing ten European facilities for recycling aluminium and manufacturing aluminium rolled products. At the same time, at the 2018 General Assembly of the association, members elected Roberta Niboli (Raffmetal) as Vice Chair and Peter Basten (Constellium) as Treasurer.

Russian group Vimetco sold a stake of nearly 34 per cent in Romania’s Alro – the largest aluminium and aluminium alloy producer in South-Eastern Europe. The sale comes after Vimetco – a majority shareholder of Alro – failed to sell a 54 per cent stake in Alro through a secondary public offering (SPO) this summer. Russian group Vimetco and affiliated company Conef held over 87% of Alro’s shares before this transaction. Earlier in the week, Alro borrowed EUR 70 million for working capital and investments. Alro ended the first nine months of this year with a net profit of EUR 43.5 million.

The Alliance for Beverage Cartons and the Environment (ACE) launched a new platform to encourage the industry to recycle carton across Europe. Named EXT:ACT – Driving Value for mulitmaterial recycling, the platform is a brainchild of a number of ACE’s members –BillerudKorsnäs, Elopak, SIG Combibloc, Stora Enso and Tetra Pak – seeking to foster recycling of beverage cartons, including the non-paper components, such as polymers and aluminium. The platform will be based in Frankfurt and aims to bring together stakeholders from across the packaging recycling industry.

The US Treasury said it would lift sanctions on Rusal, which could see metal produced by the company secure its place in the global supply chain after eight months of sanctions threatening to disrupt the European and global aluminium industry. The deal reached with the Treasury Department will now have to be approved or rejected within 30 days by Congress. The sanctions resulted in higher prices for aluminium consumers due to lack of substitute metal. Following the announcement, the price of aluminium hit a low of $1,905.5 a tonne on the London Metal Exchange. The LME said if Rusal were removed from the sanctions list, it would lift a temporary suspension on trading of Rusal metal. Rusal said in a statement that it welcomed the decision and “will continue to do everything that is necessary to return the company to the regular working conditions.” Rusal is the largest aluminium producer outside China and employs 62,000 people in Russia and other countries, including at Europe’s largest alumina smelter Aughinish in Ireland.

#Rusal reaches a deal with the US Treasury – positive developments for the European #aluminium market. US Congress yet to vote https://t.co/HKNlpxwpZ5 pic.twitter.com/V4HEzwgKFe

2018 has been Aluminium Stewardship Initiative’s first year of implementation as an independent third-party certification program for the global aluminium value chain. The organisation has increased its membership with new companies joining from around the world including expanding engagement in China. 10 ASI Certifications have been issued this year, covering all parts of the aluminium value chain. Some of the major companies that have received ASI Certification in 2018 are AMAG Austria Metall AG, Amcor, Audi AG, Constantia Teich, Hydro Hoogezand, Rio Tinto and Tetra Pak.

We just sent out our last newsletter of the year! In this issue: the end-of-year video wrap-up, ASI is an Associate Member of @ISEALalliance, new certifications map, new members and save-the-date for our 2019 AGM in Norway. https://t.co/VniRdInI0D See you again next year! pic.twitter.com/6PBk33udee

The British sports car maker Morgan Motor Company confirms a new sports car for 2020. Baptised ‘Wide Body’, the car is based on an all-new bonded aluminium platform. Transport accounts for the largest share of aluminium consumption estimated at 27 per cent. Aluminium in cars is expected to increase further in the coming years due to the metal’s properties allowing for energy efficiency and lower CO2 emissions.

Morgan will mark its 110th anniversary with a new sports car. The ‘Wide Body’ will use an all-new bonded #aluminium platformhttps://t.co/4vGOHfqLEQ pic.twitter.com/ueOlGRFBKq

According to Aluminium Closures Group, wines using aluminium closures were rewarded in all categories at the Mundus Vini Summer Tasting 2018. The association points our that wines in the higher price category are increasingly equipped with screw caps rather than wooden corks. Aluminium is rapidly becoming a metal of choice in the beverage market: while plastic bottled are already increasingly ditched in favour of aluminium, the light metal is also competing with glass when it comes to wine bottles.

United Arab Emirates’ aluminium sector represents 1.4 per cent of the country’s total GDP bringing in around EUR 4.8 billion in 2017. According to an expert study conducted by Oxford Economics, one in every 100 people working in the UAE is either employed directly in the aluminium sector, its supply chain, or benefits indirectly. Emirates Global Aluminium sells approximately 10 per cent of its production domestically with the rest of the production exported to more than 60 countries worldwide.

Aluminium Extruders Council (AEC) welcomed the conclusion of the investigation conducted by US Customs and Border Protection (CBP) that determined that two Chinese companies were involved in illicit transhipment of extruded aluminium into the US. The imports, marked as products of Malaysia, were made in China before trying to make their way to the US without paying duties. CPB highlighted the company’s unwillingness to cooperate with the investigation. Jeff Henderson, AEC President said: “Transshippers like these companies should know we will continue to locate and bring to justice those that seek to evade U.S. trade laws and the AEC’s aluminium extrusion orders against China.”

Heads of Chinese aluminium firms met on Friday in a rare meeting and decided to cut at least another 800,000 tonnes per year of smelting capacity in coming months, reports Reuters. Representatives from China Hongqiao Group, Aluminum Corp of China and other major aluminium producers came together to tackle two-year low prices and weakening demand in the country’s aluminium sector. Companies at the meeting said operating pressure on smelters was “reaching the extreme limit”, writes Reuters’ Tom Daly quoting Antaike.

In response to demands from the country’s end-users, Canada will provide targeted relief on a range of aluminium and steel products from the US. The country introduced this summer reciprocal tariffs of 25% on US steel imports and 10% on US aluminium imports. “The government recognizes that Canadian countermeasures against US imports can create challenges for Canadian manufacturers… These include manufacturers in sectors such as energy, advanced manufacturing, construction, and automotive parts, among others,” the Department of Finance said in a statement.

The Year That Politics Broke The Metals Cycle – Andy Home

In his commentary for Reuters, Andy Home writes that this year politics has broken the economic cycle for the LME metal prices and wonders if metals can escape the trade war blues in the coming year. With the sanctions on Rusal and Trump’s Section 232 measures, aluminium has been at the front line of the US President’s trade wars. The sanctions disrupted aluminium supply chains across the world and hit Europe’s automotive sector before a promise of a deal came last week.