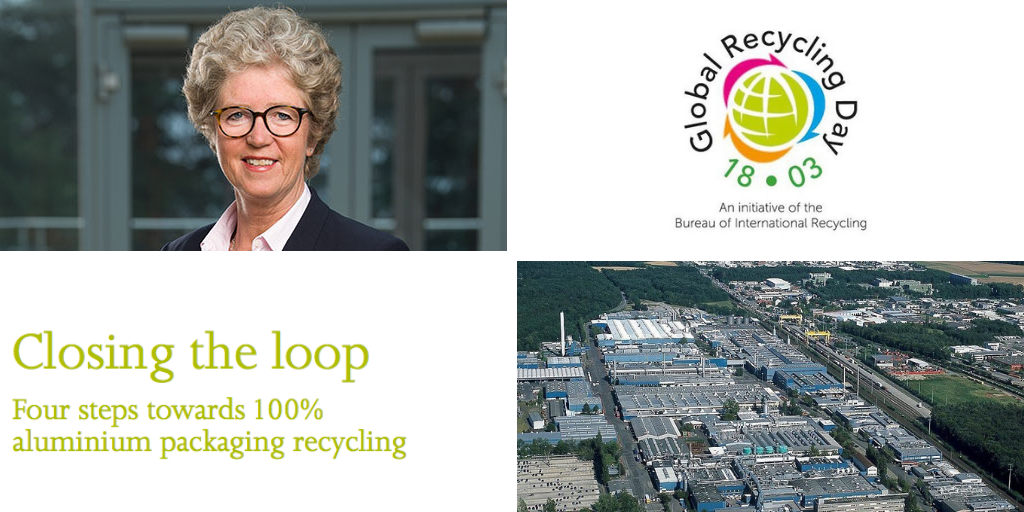 Among the latest main news: Hilde Merete Aasheim is appointed as new President and CEO of Hydro, UK’s think tank Green Alliance is urging the government to recycle all aluminium packaging in the country, Constellium expands its Singen plant in Germany, and British alloy makers are increasingly worried about potential EU duties on their products. In the world, ASI expands further its membership as more companies are publishing their sustainability reports, and Canadian government will support its SMEs affected by the US tariffs on Canadian aluminium and steel.

Today is Global Recycling Day. An initiative of the Global Recycling Foundation, Global Recycling Day is a movement dedicated to celebrating the importance recycling plays in preserving primary resources and securing the future of the planet. This year’s theme is “Recycling into the Future”, a theme close to FACE’s heart given the role of aluminium in fostering Europe’s circular economy. Thanks to its durability and recycling properties, an incredible 75 per cent of aluminium ever produced is still in use today. The light metal is key to Europe’s sustainability and climate goals.

Hilde Merete Aasheim is succeeding Svein Richard Brandtzæg as new President and CEO of Norsk Hydro. Brandtzæg has decided to step down after a decade at the helm of the Norwegian aluminium company. Aasheim is currently executive vice president and head of Hydro’s Primary Metal business area. She has worked within the aluminium industry since the start of her career. The appointment will be effective on May 8th. In the meantime, Brandtzæg commented on Hydro’s 2018 annual reporting, saying that 2018 stood out as “the most demanding year” for him due to production issues at Alunorte and an increase in raw material costs which damaged the company’s bottom line. Brandtzæg is however positive about Hydro’s future position thanks to the company’s integration in the global aluminium value chain.

Congratulations ⁦@AasheimHilde⁩ , the next President and CEO of ⁦@NorskHydroASA⁩. I am very thankful after 33 years in the company and 10 years as CEO working together with highly competent, great colleagues and the metal of the future. pic.twitter.com/DbTWMbB5ac

UK Urged To Recycle All Of Its Aluminium

The think tank Green Alliance called on the UK government to be more ambitious in its overhaul of recycling system. In its latest research, Green Alliance estimates that doubling the current recycling rate could save the country £50 million (EUR 58 million) of wasted aluminium each year, cut carbon dioxide emissions, and create jobs in the recycling industry. The report provides four steps towards 100 per cent aluminium packaging recycling.

We welcome the @GreenAllianceUK report ‘Closing the loop';it reconfirms the conclusions of modelling that @resourcefutures conducted on our behalf, which demonstrated #aluminium packaging could achieve high recycling rates under a reformed packaging system https://t.co/vGa5IWi98c https://t.co/3bj1EVzxM7

Constellium announced last Monday the expansion of its plant in Singen, Germany. The firm will install an additional aluminium extrusion press to meet the demand of its automotive customers in Europe. The new extrusion press will go live mid-2020 and create additional jobs. The Signen plant has been in service for over 100 years.

British aluminium alloy manufacturers are worried about potential EU tariffs on British products, reports Argus Media. Uncertainty around the terms of the UK’s exit from the EU has already led some secondary alloy producers to halt export to the EU, while others are warning about a potential 6 per cent duty that will be imposed on UK aluminium goods exported to the EU in case. “People don’t want to mess around with duty, they just want delivered material,” one producer said. “They are going to play safe and buy from other suppliers.”

Rusal Will Save $10 Million With AI-Based System

Russia’s Rusal will implement an AI-based system for electrolyc cells and expects to save over $10 million yearly. The company is currently optimising its production processes and bets on innovative AI technologies to support its long-term strategy. The pilot project is developed by Mechanica AI and involves a machine learning system identifying underperforming cells and alerting on unnoticed technical problems to avoid yield losses at aluminium plants.

Canada’s federal government announced last Monday C$100 million (EUR66 million) in non-repayable contributions for small- and medium-sized aluminium and steel manufacturers and consumers in Canada. The funding follows stalled talks between the US and Canada regarding the removal of US duties on Canadian imports of aluminium and steel. The government said “escalating commodity prices” and “increasing financial and competitive pressures” are significantly impacting producer and consumer SMEs operating within Canadian steel and aluminium supply chains.

Automaker Toyota announced increases in its investments in the U.S. and pledged to boost its manufacturing presence in the country, including an expansion to its Tennessee aluminium plant. The company will purchase new equipment and will expand the facility to double its annual capacity of hybrid transaxle cases and housings to 240,000.

US Could Offer Aluminium Tariff Relief For Mexico And Canada

The US government is considering lifting aluminium and steel tariffs on its North American trading partners, said U.S. Trade Representative Robert Lighthizer. “What I’m trying to do is a have a practical solution to a real problem … get rid of tariffs on these two, let them maintain their historic access to the US market which I think will allow us to still maintain the benefit of the steel and aluminium program,” Lighthizer told the U.S. Senate Finance Committee.

Swedish rolled aluminium producer Gränges launched a number of long-term sustainability targets to increase the firm’s contribution to sustainable development and secure its future competitiveness and growth. Planning ahead to 2025, the company aims to achieve five sustainability targets, including reductions in its direct and indirect carbon emissions and increasing the share of women among its senior management. Gränges expect its targets to increase the company’s financial top and bottom-line.

Aludium – European manufacturer and supplier of rolled aluminium products – released its first suitability report covering the year 2017. With this report, the firm plans to increase transparency and demonstrate its commitment to its customers and the environment. In the Planet section of the report, Aludium outlines its efforts to enhance recycling, reduce energy and carbon emissions while showing how the company has enhanced its capabilities so far.

Congrats to our 50% JV Alunorf in Germany, the world’s largest #aluminium rolling mill: They are certified against @Aluminium_S_I Performance Standard for environmental, social and governance performance.https://t.co/wDuazARqp8 pic.twitter.com/jpwEX44ya8

Coca-Cola is promising to help enhance recycling with a multi-million fund for communities across the United States. The programme aims to improve access to recycling and increase the capture of more quality recyclable items. With such programmes, Coca-Cola sets an ambitious goal for itself: collect and recycle every bottle or can it sells by 2030.

Early last year, Coca-Cola set an ambitious goal for itself: Collect and recycle the equivalent of every bottle or can it sells by 2030. Here's how it plans to deliver. https://t.co/J3HH9IUimX