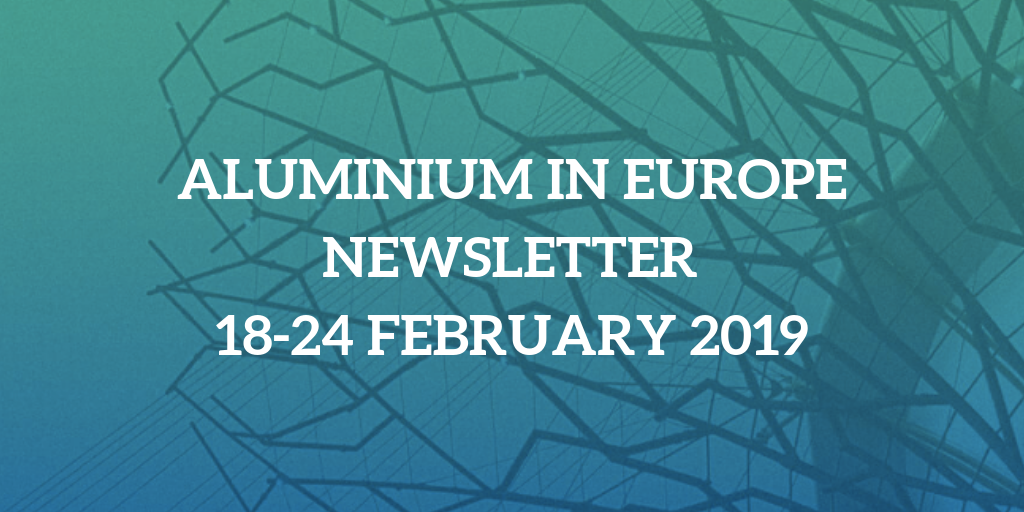 Among the latest main news: German Trimet is increasingly moving towards scrap aluminium, the British aluminium industry is worried about the effects of a no-deal Brexit, EU automakers voice their concerns about any potential U.S. tariffs, and Indian and Chinese aluminium producers could disrupt the European aluminium industry. In the world, several global aluminium producers released their annual results, China is looking for larger amounts of alumina, and aluminium output falls to the levels last seen in September 2018.

Liberty British Aluminium renewed its partnership with GB Railfreight for another three years to deliver alumina from North Blyth to Fort William in the Scottish Highlands. Fort William is the only remaining aluminium smelter in the UK and Liberty is turning the facility into a future hub for Britain’s automotive industry with a project to expand alloy wheels manufacturing by 2022.

Chinese Exports To The UK Could Increase Post-Brexit

“China is desperately trying to find new markets after losing the US, so Chinese imports could increase after Brexit,” warned an Aluminium Federation’s (Alfed) representative. China has been redirecting its trade flow away from the US to other countries following the imposition of Trump’s tariffs on steel and aluminium imports. The UK is set to leave the EU on 29 March and the British government has yet to agree on withdrawal terms. Last year, the UK exported 671,000t of aluminium semi-fabricated products to the European Single Market, and imported 860,000t of semi-fabricated products, unwrought metal and scrap from Europe.

Faced with Trump’s aluminium tariff wall, producers in China and India are flooding the EU and putting at risk European jobs, writes the French weekly Economie matin. With increasing production rates and domestic overcapacity, Chinese and Indian producers are turning to Europe to export their metal, which is produced in smelters powered by coal in contrast to nuclear power in France and hydropower in Russia and Norway. In China, primary aluminium production uses electricity that comes almost entirely from coal. With no incentives to use renewable energy, producers in China and India will only increase their reliance on coal, argues the article citing a research study from the University of Bordeaux.

The European Automobile Manufacturers Association (ACEA) expressed its concern about any potential new U.S. tariffs on EU automakers. The group warned that any trade restrictions would severely affect both the EU industry and the American economy and consumers alike. Auto manufacturers would have to raise their prices to mitigate restrictive measures, which will eventually hit the pockets of consumers. European automakers export 60 per cent of their vehicles to the U.S. and EU manufacturers support more than American 470,000 jobs. The EU promised to retaliate if President Trump went ahead with imposing automotive tariffs. The U.S.’s Section 232 tariffs on European steel and aluminium remain in effect with no prospect in sight for their removal.

"Clearly, imports of #cars and auto parts from the EU do not pose a #NationalSecurity risk to the #UnitedStates" | LEARN WHY: https://t.co/OAqMyEshvR #tariffs #Section232 pic.twitter.com/4ttlEbkJXz

The German Aluminium Association (Aluminiumverband – GDA) has launched their new website «Alles über Alu» to provide end consumers with answers to questions around aluminium including health, sustainability and technology. The website (in German) also has an extensive Q&A section about aluminium products and everyday life.

As the demand for aluminium raw material is growing, China restarted an 80,000 tonnes per year alumina refinery in the southwestern city of Chongqing. The Chalco-operated plant was closed over four years ago due to low alumina prices. Last year, China’s alumina production went up 9.9 per cent year-on-year amounting to 72,53 million tonnes.

Similarly, Century Aluminium, which operates aluminium facilities in the U.S. and Iceland, announced its latest results showing a 19 per cent jump in sales during 2018. Commenting on the results and the developments in the global aluminium industry, Century’s President and CEO Michael Bless predicted that the market would stay in deficit in 2019. Last year, Century restarted two idled facilities in the U.S. and secured an extension of energy contracts to power the plants.

The global manufacturer of aluminium rolled products Constellium released the annual results highlighting a 6 per cent year-on-year increase in aluminium shipments and a 12 per cent rise in revenue. Each of Constellium’s business units delivered a record annual adjusted EBITDA and the company also expects to show strong performance in the current year.

Malaysia’s government does not plan to extend a three-year-long moratorium imposed on bauxite mining, which was put in place due to environmental concerns. Before the ban came into force in early 2016, the country was the biggest bauxite supplier to China. The ban comes to an end at the end of March and the government is eager to assure that the sustainable mining practices will be put in place to renew bauxite mining.

Sustainable Luxury Yacht Made Of Recycled Aluminium To Go On Sale

Norway’s Norsk Hydro partnered up with the Dutch start-up company Vaan to produce a luxury sailing yacht made of scrap aluminium. With the new yacht, the companies are making important steps to make the boating industry more sustainable, as only three per cent of all discarded boats are currently recycled. The world’s first recyclable yacht will is built with 75 per cent recycled aluminium as well as other natural materials such as certified wood.

We are proud to contribute to this beautiful, recyclable yacht by our partner @Vaanyachts From recycled #aluminium scrap to the world’s most #sustainable luxury sailing boat! How cool is that? #expertsunitehttps://t.co/MAY8w62uCe pic.twitter.com/XKZCLHPu4o

India Railways started working on Train-20 – the next generation train with an aluminium body. The company issued tenders for suppliers of aluminium planning to secure 80 per cent of train’s components domestically. The aluminium body means that the train will consume only one-third of the energy the current trains require.

Why India's next generation trains will be made of #aluminium? https://t.co/yKtiMQpxzG

Global aluminium production fell 3.5 per cent month-on-month last week to the levels last recorded in September 2018. China saw the sharpest fall in production down 5.4 per cent while production outside of China fell by 1 per cent. The fall is attributed to the seasonal production limits in China, which are now coming to an end and Chinese producers are in the process of restarting capacity.

Writing for Reuters, Andy Home links the falling production numbers in China to domestic producers’ struggles with weak demand and low prices. Faced with domestic challenges, Chinese producers are looking overseas to export their metal. This export surge is forcing more smelters closures elsewhere in the world, including the announced closure of two Spanish smelters by Alcoa.