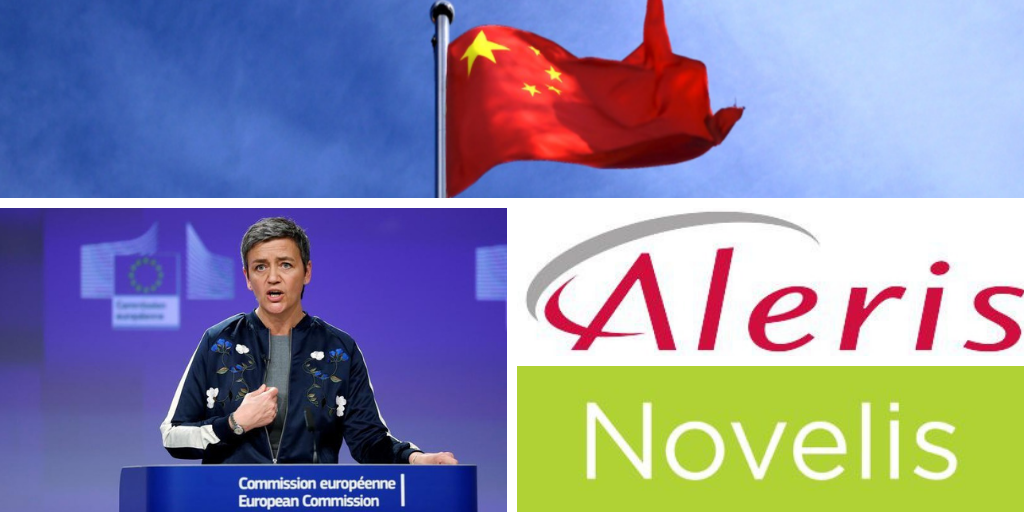 Among the latest main news: the European Commission is launching an in-depth investigation into the proposed merger of Novelis and Aleris, Montenegro is revamping its aluminium industry, Romania’s ALRO sees a drop in profits. In the world, Rusal is boosting its aluminium production, China’s Chalco overtakes Rusal as the second largest aluminium producer in the world, and aluminium associations from the US, Canada and Mexico are urging President Trump to lift his tariffs on North American aluminium.

Launching an extensive investigation into the proposed acquisition, the European Commission said they were concerned that the deal could lead to weaker competition in the supply of various semi-finished aluminium products and eventually disadvantage industrial consumers in the EU. The merger could mean reduced choice in suppliers and higher prices for the metal sheets used in vehicle’s body structure and closures.

Romanian aluminium company ALRO published its consolidated and separate financial full-year results for 2018 showing a net profit decrease of 29 per cent. Meanwhile, the company’s turnover saw a slight increase thanks to favourable market conditions and sales mix. Looking forward, ALRO will focus on increasing its production of processed aluminium and increasing its share of high value-added products.

Amafond and Indo-Italian MilanHub organised a meeting for the new Consul General of India in Milan – Mr Binoy George – to introduce the Consul to the economic community in Italy’s largest industrial region. The Indo-Italian Metal Hub platform promotes the interchange between the industrial sectors of Italy and India. This summer, the platform organises an executive programme – the Aluminium Innovation Manager – with close cooperation between ArtValley, CUOA, AAI, IIMH,Al Circle, A&L and the associations Amafond, Assomet, AIFM, Assofond. Other participating companies are Danieli, Sideridraulic, Gruppo Gaser, LucchiniRS and Metra.

Russia’s leading aluminium producer launched new production at its Boguchansk aluminium smelter doubling its annual capacity to 298,000 tonnes. The Boguchansk aluminium smelter – one of the largest investments in an energy and metals project – was opened in 2015 with an annual capacity of 150,000 tonnes. The smelter boasts the most modern technologies and is the outcome of a partnership agreement between Rusal and the hydropower provider RusHydro. Having reached an agreement with the US government to remove the threat of sanctions, Rusal is now seeking to restore sales contracts and sign contracts with new customers.

Updating its investors on the situation at its Brazilian aluminium refinery Alunortre, Hydro said that it had reached an agreement with the local authorities to engage external assessors to examine available studies on the environmental impact of the plant. If the external assessment agrees with the available studies, Alunorte would be able to safely return to full capacity production. Hydro estimates that the examination would be completed by the end of April.

Alcoa’s Massena aluminium smelter and the New York Power Authority reached an agreement on a new seven-year energy deal. The plant will receive low cost hydropower with the price of electricity linked to the price of aluminium – falling or rising in response to the global market for the light metal.

American aluminium milling company Jupiter Aluminium announced a USD 12 million investment plan to expand its plant in West Virginia. The company did not mention a date has been set for the expansion’s commissioning. Jupiter uses recycled aluminium for almost of all its feedstock and operates three plants in Indiana and West Virginia.

Chalco – Aluminium Corp of China Ltd – increased its total production by 18 per cent in 2018, making it the world’s second largest aluminium producer behind China’s Hongqiao Group. The spot was previously held by Russia’s Rusal, which was blacklisted by the U.S. sanctions for most of last year and saw its sales fall by 7.2 per cent. However, Chalco’s production increase did no translate to higher returns: the company saw the first quarterly loss in three years for the fourth quarter due to weak domestic demand and falling aluminium prices.

The Aluminium Association, the Aluminium Association of Canada and IMEDAL released a joined letter urging the Trump administration to exempt Canada and Mexico from his aluminium tariffs and ensure quota-free trade for the North American countries prior to the implementation of the recently negotiated free trade agreement USMCA. In the letter, the associations argued that the new USMCA could not work as intended without exemptions for Canada and Mexico form the Section 232 tariffs. The letter also called on the US President to tackle “the real problem facing the aluminium industry” – the illegally subsidised aluminium overcapacity from China.

While the Mexican government reiterated its stand against the proposed aluminium and steel quotas and demanded the complete removal of tariffs on the metals to ratify the USMCA trade agreement, the Canadian authorities are reportedly considering whether to increase its retaliatory tariffs against the US. The Canadian government found that their initial counter-measures were falling short of a proper retaliation against Section 232 tariffs.