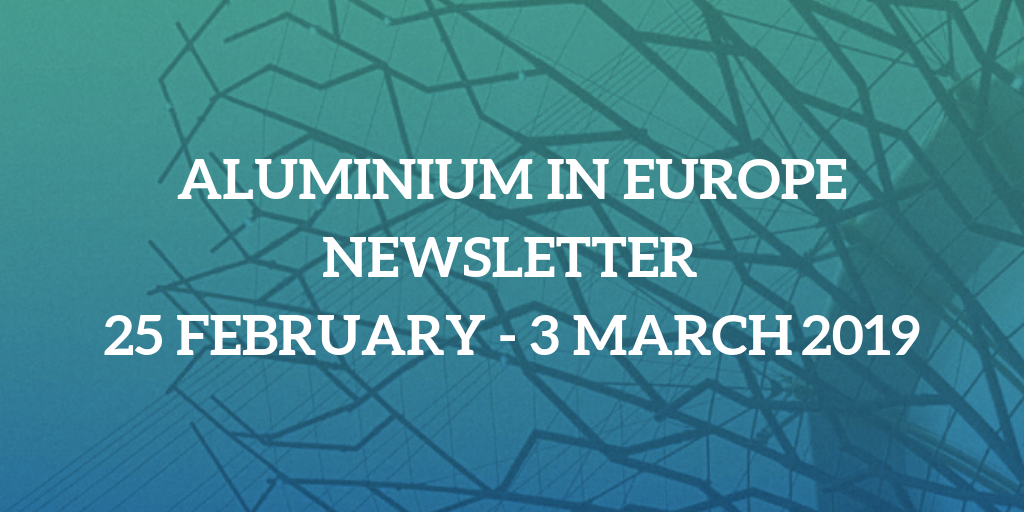 Among the latest main news: Italy’s last remaining aluminium smelter Portovesme is reportedly set to return to production in 2020, Austria’s AMAG posts record shipment and revenues results for 2018, German aluminium companies are positively cautious despite many uncertainties that could affect the extrusion industry this year, and the 15th International Aluminium Recycled Congress concluded last week in France. In the world, Ghana’s president will seek to build an integrated aluminium industry, Aluminium Stewardship Initiative welcomes its first member from China, and U.S. and Canadian officials are positive about removing Trump tariffs on Canadian aluminium and steel.

Switzerland’s Sider Alloys will relaunch the Italian Portovesme aluminium plant in the coming year, according to a S&P Global Platts source. The Swiss company acquired the Portovesme smelter – Italy’s last remaining aluminium production plant – from Alcoa in February 2018 when it fell victim to Alcoa’s cost-cutting campaign. According to government figures, the plant filled 80 per cent of the Italy’s demand for aluminium.

The plant filled 80% of Italy’s demand for #aluminium https://t.co/5KZmDxbaKl pic.twitter.com/p667pnTs7W

AMAG Austria Metall AG released its 2018 financial year results, showing new records in shipments and revenue supported by growing demand for aluminium products and company’s ramping-up of its new plants in Ranshofen. AMAG avoided forecasting its future earnings, referring to the tendency of high price fluctuations in the raw materials markets and rising economic uncertainties due to the planned UK’s exit from the EU and weaker EU car sales

The UK secondary aluminium price went down by 2.9 per cent last week due to weaker demand both in the UK and in the EU, reports Fastmarkets. Having assessed the prices of diecasting ingot deals negotiated on the UK market, Fastmarkets concluded that the price fell to a three-month low in February. The UK is set to leave from the EU on 29 March, when the period for negotiating a withdrawal agreement will end unless an extension is agreed.

Dutch yachtbuilder Heesen Yachts plans to launch a new motor yacht with a hull made entirely of aluminium alloy. The vessel – 500 Aluminium Class – will be more agile in navigating through shallow waters thanks to improved shape of the hull designed by Van Oossanen Naval Architects. The new sporty motor yacht will also feature a greener engine allowing for reduced emissions. Currently under construction, the yacht will be ready for delivery in January 2021.

“Dead Slow Ahead” For Aluminium Extrusion Industry In 2019

It might not be an easy ride for the aluminium extrusion industry this year, writes GDA – a German association of aluminium companies that produce raw aluminium or aluminium products. While staying cautiously optimistic, GDA warns of uncertain times ahead: Brexit, weaker industrial production growth, and trade disputes including Trump’s threat of tariffs on EU cars are among the main risks for the industry. Germany is Europe’s larges market for extruded products and accounts for almost a third of total production. Imports of extruded products into the EU increased by 4 per cent in 2018, with China accounting for 34 per cent of total imports.

The #aluminium #extrusion industry held its course during the year. However, the speed was by no means steady: https://t.co/SWGYv9xij9 #economy pic.twitter.com/XbGl1jM8gE

The International Aluminium Recycling Congress took place on 26-27 February in Colmar – France. This year’s event – organised by European Aluminium – brought together over 150 participants to discuss the most recent developments in aluminium recycling and circular economy.

“The technologies are in place today to ensure that what comes out of a recycling plant is product and no longer just waste,” says Alan Peel @AltekGroup at #ALURecycling19 #aluminium #saltslag pic.twitter.com/6FPGOlZMmJ

UAE’s Emirates Global Aluminium (EGA) will supply almost the entirety of its production of carbon dust – a by-product of aluminium smelting – for use as alternative fuel by the UAE cement industry. The partnership will reduce enable UAE’s cement businesses to use a larger amount of this alternative fuel and rely less on coal imported from overseas.

Carbon dust is a by-product of #aluminium smelting and can be used as a fuel in cement industry https://t.co/W9hw31v1HQ

EGA’s bauxite mining project in Guinea is steaming ahead with the latest delivery of the Barge Loader – a massive piece of equipment that will load bauxite ore into self-propelled barges for transport to waiting bulk cargo ships offshore. First bauxite exports from the West African country are expected in the second half of this year. EGA operates aluminium smelters in Abu Dhabi and Dubai and its production makes the UAE the fifth biggest producer of the metal in the world.

Ghana’s president spoke in favour of developing an integrated aluminium industry in the West African nation. In order to reach this goal, the government will pursue further agreements with foreign investors to develop bauxite mining and production. Ghana sits atop some of the highest-quality bauxite ore ever discovered. The country sealed several contracts with China in exchange for infrastructure improvements. However, the President’s plans have been met with scepticism, with some arguing that Ghana could not meet the energy demand required to power the industry.

Alcoa decided not to accept a proposal to use binding arbitration to solve the dispute between the management and workers at Aluminerie de Bécancour in the Canadian province of Quebec. While the workers voted unanimously in favour of seeking binding arbitration, Alcoa said that this proposal would not offer an appropriate solution to the lockout. The plant has been shuttered since January 2018. The workers will now be seeking the local government’s help to ensure a labour-friendly deal.

Aluminium aerosol cans exceeded the 8-billion mark for the second year in a row according to AEROBAL – the International Organisation of Aluminium Aerosol Container Manufacturers. Every second aerosol can in the world is made from aluminium amounting to some 8.14 billion aluminium aerosol cans manufactured annually. Demand for aluminium cans was particularly strong in the cosmetics sector. Aluminium offers a sustainable alternative in the packaging industry as customers are putting pressure on producers to use fewer plastics.

Washington officials echoed last week’s comments by their Canadian counterparts on the need to remove the U.S. tariffs on Canadian aluminium and steel. White House economic advisor Larry Kudlow said “heavy” talks were underway to remove the tariffs. The officials expect a positive resolution on the tariffs issue within the “next few weeks.” At the same time, Canada’s PM Trudeau talked to President Trump last week to urge him to lift the tariffs and enable the ratification of the newly negotiated USMCA trade agreement. Canada is the largest supplier of aluminium and steel to the U.S.

India delayed its deadline to impose the retaliatory tariffs on the U.S. for the sixth time in order to give more time for discussions with the U.S. government. The U.S. passed import duties on Indian aluminium and steel, and India planned to retaliate with tariffs on American products since last summer. Indian and American officials are currently trying to negotiate a trade agreement with India pressing for exemption for its metals and for greater access for other products.