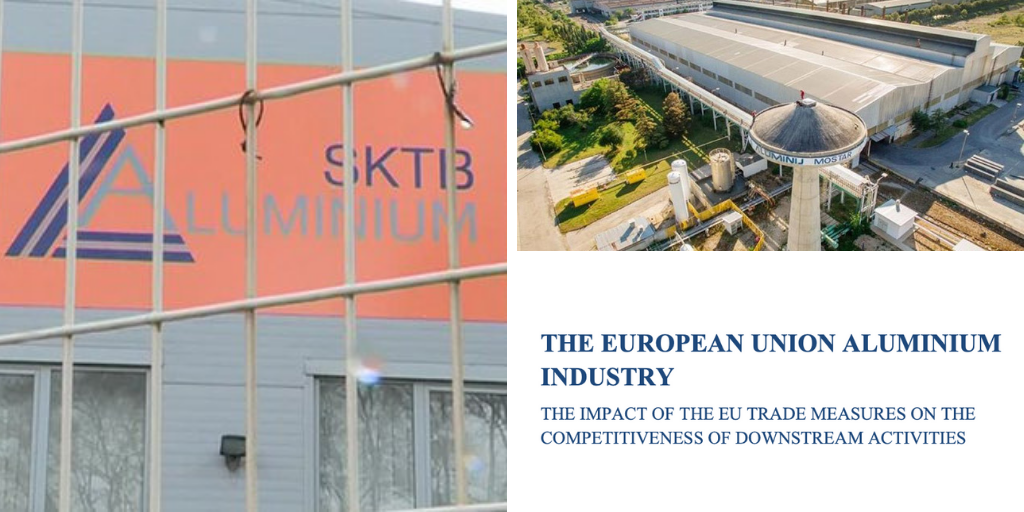 Among the latest news: in Europe, aluminium consumers are urging the EU to take swift action to prevent the demise of Europe’s aluminium industry, a French aluminium company goes bankrupt, and Bonsnia’s Aluminij Mostar is seeking to partner up with Glencore. In the world, UAE’s EGA receives its huge delivery of bauxite ore from Guinea, China introduces restrictions on imports of aluminium scrap, and Canada is investing into its domestic aluminium industry.

FACE’s campaign to request European authorities to lift import tariffs on raw aluminium is in full swing, making headlines in Europe and around the world last week.

In her article on the US Midwest aluminium premium Andrea Hotter – Special Correspondent at Fastmarkets AMM – draws parallels between American and European aluminium consumers who are paying a voicing their concern over obscure processes that make consumers pay more than they should for the light metal whether it is imported or not.

Apex Act not the answer to #aluminium premiums; it certainly won't bring them down! There are other factors – including tariffs, energy costs – impacting premiums than price reporting agencies https://t.co/qINZhx4Ta7

SKTB Aluminium – a French downstream aluminium producer – went into administration. The company struggled financially and failed to restructure its business. A last-minute attempt to secure a takeover by Liberty House Group failed due to environmental concerns. The local authorities did not wish to authorise Liberty House to recycle aluminium at the existing premises.

SKTB aluminium smelter is the latest victim of de-industrialisation in Europe https://t.co/kdlThJVbM2

Aluminij Mostar – Bosnia’s aluminium smelter and one of the country’s largest exporters – is seeking to partner up with Glencore to stay afloat amid heavy debt, high raw materials and electricity prices. The country’s industry minister said that the government could not provide subsidies to any investor seeking to secure low energy prices. The government currently owns a 44 per cent stake in the smelter.

Aluminij Mostar has been in trouble for years over heavy debt accumulated because of high alumina & electricity prices https://t.co/9lEvNUwOv4

The delay in the UK’s withdrawal from the EU is creating a lot of uncertainty and harming the UK’s aluminium industry according to Giles Ashmead – the president of Aluminium Federation (Alfed). Many Alfed members lost money in investments in stock and warehousing when the exit date was pushed back at short notice. Additionally, some companies left the association due to their parent companies choosing to supply the UK from their facilities in the EU rather than keep British subsidiaries.

Emirates Global Aluminium welcomed the first bulk cargo vessel at Khalifa Port in Abu Dhabi. The ship delivered import bauxite ore from Guinea for newly launched Al Tawerlah alumina refinery. The port was modified specifically to receive huge cargo ships that allow EGA to reduce shipping costs. Al Taweelah alumina refinery is the first in the UAE and the second in the Middle East, and is expected to meet 40 per cent of EGA alumina needs once fully operational.

Today we announced the arrival of Cape Taweelah at EGA’s quay at Khalifa Port, inaugurating EGA’s use of Capesize ships to bring bauxite ore from the Republic of Guinea to Abu Dhabi for Al Taweelah alumina refinery. https://t.co/OZUsu5mLN8 pic.twitter.com/HO3VaGbwQp

Chinese government unveiled new curbs on aluminium scrap imports that are expected to lead to a dramatic drop in scrap shipped to Chinese ports. In effect from July 1, new quotas limit aluminium scrap to a total of 54,256 metric tonnes for the third quarter of this year. China plans to implement a blanket ban on scrap imports by 2020.

Canada To Invest Into Aluminium Sector

Canadian government promised to invest C$10 million (6.6 million euros) in Alcoa’s aluminium plant in Deschambault-Grondines, Quebec. The grant will be spent on acquiring new equipment enabling the plant to increase aluminium production at a lower cost. The move is set to preserve industry jobs and improve the competitiveness of Canada’s aluminium sector on the global market.

Baosteel – one of the largest steel producers in China – will build an aluminium test project in Henan province by mid-2020. The new alloy casting and deep processing facility will have an annual capacity of 300,000 tonnes. Concerned about future demand growth, Chinese steel companies are shifting to aluminium production, specifically the automotive aluminium sector.

Aluminium Stewardship Initiative (ASI) certified Norsk Hydro’s bauxite and alumina operations at the Paragominas mine and the Alunorte refinery in Brazil. The latest certifications bring Norsk Hydro one step closer to achieving ASI certifications throughout its entire value chain.

Recycled Aluminium Could Be Used In Luxury Packaging

The French specialist in metal processing G. Pivaudran announced a series of technical tests to determine how to increase the use of recycled aluminium in luxury packaging markets. The company seeks to improve the quality of recycled aluminium and offer it for manufacturing packaging of perfumes, cosmetics and spirits among other things.

Svyatoy Istochnik – one of the biggest bottled water players in Russia – introduced to the market a new flavoured water offering in aluminium cans. The company chose the can – manufactured by Ball Corporation – as part of its strategic packaging shift. The can is suited for all types of beverages and can be infinitely recycled.

Rio Tinto unveiled a new aluminium alloy Revolution-AI™ that could decrease the weight of vehicle wheels by 7 per cent while making them up to 20 per cent stronger than traditional wheels. The innovative alloy will help car manufacturers to reduce CO2 emissions thanks to lightweighting and fuel efficiency while making safer cars.

Emirates Global Aluminium announced that its employee initiative scheme saved the firm around five millions euros so far this year. EGA received over 14,000 suggestions on how to improve its daily business and reduce costs. The company put into action two in five of these suggestions and rewarded its employees for their commitment. The initiative programme has been in place since 1981 and last year a record of 38,037 suggestions were submitted.