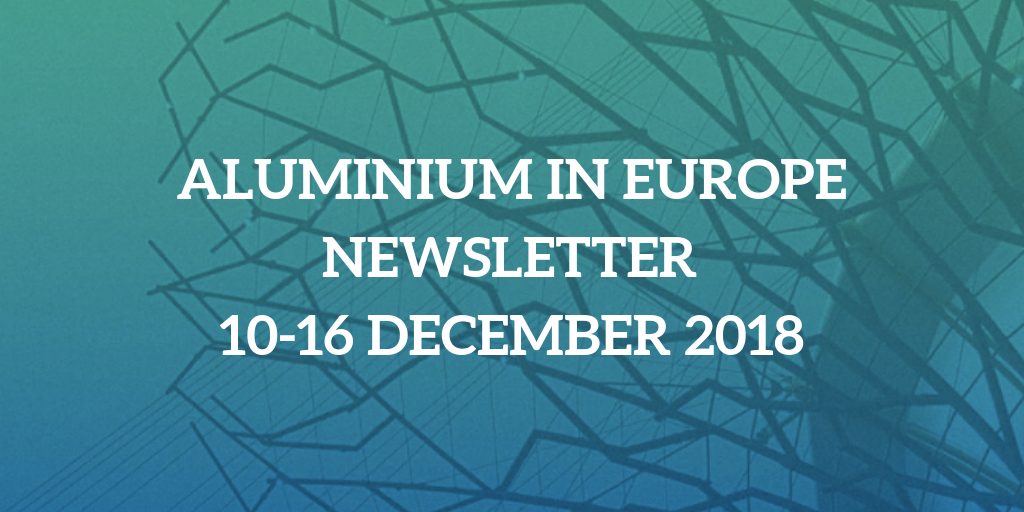 Among the latest main news: In Europe, Spanish aluminium products company Baux is acquired by the American Jupiter Aluminium, Liberty completed the purchase of Dunkerque Aluminium, and the Irish government is asking the US for assurances over Aughinish future. In the world, EGA is ending the year by moving forward with its projects to build an alumina refinery and a bauxite mine, the US pushes back against Chinese aluminium sheet imports after an investigation into unfair subsidies.

NK5 – an investment company specialising in businesses experiencing difficulties – announced the sale of the Spanish industrial group Baux to Jupiter Aluminum – an American aluminium recycling specialist. Baux is devoted to the production of hot- and cold-rolled and lacquered aluminium products from 100%-recycled materials.

Ireland’s Finance Minister Donohoe raised the question of the Limerick plant with the US Treasury Secretary Mnunchin. The future of the Aughinish Alumina plant is uncertain due to the impact of US sanctions on Rusal – the plant’s parent company. The Irish government noted that Donohoe “was going with a very simple message that it (Aughinish) was of strategic importance not only to Ireland but to Europe and the broader aluminium industry.” After the meeting, the Irish counterpart was said to be confident that a solution would be soon achieved. Earlier, the US granted Rusal another extension delaying stricter sanctions while the negotiations of business ownership are being discussed.

British-owned Liberty, part of UK’s “Man of Steel” Sanjeev Gupta’s global GFG Alliance, has become the official owner of Aluminium Dunkerque – Europe’s largest aluminium smelter. The plant will be renamed Liberty Aluminium Dunkerque and serve as a foundation for investment and expansion into Europe building a wider integrated manufacturing business producing components for the automotive industry.

UK Scrap Exports On The Rise After Last Year’s Dip

UK’s aluminium scrap exports are on the rise this year after a decrease in 2017, observes AlCircle. The scrap export volume is likely to go up by 12 per cent this year but will still be lower compared to 2016. At the same time, this year the UK will break a record in exports revenue. Overall, the EU is a net exporter of aluminium scrap with more than 80 per cent of EU scrap going to Asia (including 37 per cent to China) for sorting purposes.

EGA’s bauxite mining project in Guinea has reached 75 per cent construction completion. It is the largest greenfield investment in the West African country in the last four decades. First bauxite exports are expected during the second half of 2019 and will be sold to aluminium producers around the world. Guinea is the world’s largest bauxite resource holder.

Saying that there was no overflow from Alunortes’ residue deposit areas in February 2018, a Brazilian expert study concluded that Alunorte could return to 100 per cent production capacity. In the meantime, Hydro has on-going projects to strengthen Alunorte’s environmental standards and seeks to reach an agreement with the Brazilian authorities.

The inaugural plant represents the Sultanate’s foray into the sustainable building materials market. The facility will manufacture panels called Alu-Panel that are used like claddings in buildings requiring little investment and maintenance.

The US Commerce Department imposed final anti-dumping and anti-subsidy duties on common alloy aluminium sheet products from China. The Aluminum Association’s president and CEO Heidi Brock welcomed the news saying: “Rules are essential to a functioning global trading system and businesses as well as workers must have confidence that rules are enforced fairly and consistently.” Imports of common alloy aluminium sheet from China increased by nearly 32 per cent between 2015 and 2017, and have increased by 731 per cent between 2007 and 2017.

After three months of decline and despite weaker aluminium prices, China’s aluminium production jumped 3.9 per cent in November. While the climb surprised some analysts expecting winter smelter capacity cuts, the world’s aluminium behemoth churned out 2.82 million tonnes of aluminium last month. Helen Lau, an analyst at Argonaut Securities in Hong Kong, is quoted by Reuters saying that lower prices for raw materials bauxite and alumina may have been a factor.

China's aluminium output is climbing and taking analysts by surprise

American farming and automotive industry representatives ask to be included in the US-EU trade talks and that reducing tariffs and regulatory restrictions should be a key objective. The groups also pressed the Trump administration to remove Section 232 tariffs on steel and aluminium, at least while conducting negotiations with the EU. A representative of the Alliance of Automobile Manufactures noted that the “steep and unexpected increase” have increased costs for the companies that are now “witnessing flat or decreased sales” and the threat further tariffs is “injecting more uncertainty at an already fragile time.”

Trump Tariffs Are Hurting US Manufacturing

American manufactures are paying higher prices than their foreign competitors that, in turn, are increasing consumer prices and hurting American exports, according to a Business Forward study. Business Forward president Jim Doyle, is quoted saying that “American manufacturers have started shifting production overseas, and they are cutting back on capital investment. The long-term costs are becoming clear.”

Hoping for an agreement with the US authorities, India is delaying countermeasures to US steel and aluminium tariffs for the fourth time. New Delhi planned to hike import duty on 29 products from the US in response to Section 232 tariffs, but the implementation has been repeatedly postponed since this summer. Meanwhile, the two countries are negotiating an amicable outcome and the US Trade Representative is expected to come to India soon.