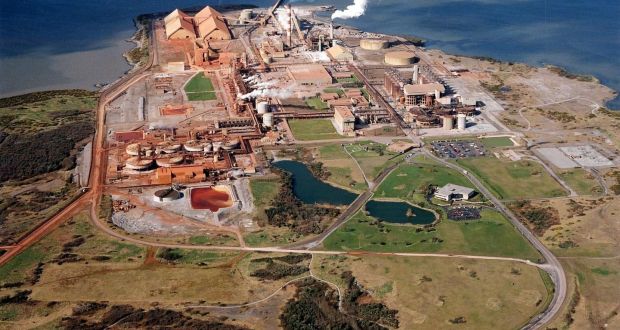 Europe’s largest alumina refinery Aughinish Alumina achieved a 15 per cent increase in revenues last year despite US Treasury sanctions imposed on the refinery’s parent company Rusal. However, in spite of higher revenues, the company’s pre-tax 2018 profits decreased by 19 per cent.

The refinery achieved a production output of 1.81 tonnes of alumina, and posted revenues of €684 million and pre-tax profits of nearly €37 million in 2018. The facility continued operations during the sanctions and the loss in revenues is attributed to increased costs.

In face of rising costs at the plant – that increased by 18 per cent last year – the refinery’s parent company Rusal is seeking to supply own bauxite that will replace higher priced bauxite supplied by other companies. At the moment, mining giant Rio Tinto is Aughinish Alumina’s main supplier of the key raw material

Aughinish Alumina – a major alumina asset of Rusal since 2007 – is one of the most technologically advanced and energy efficient facilities worldwide. The facility is located near Limerick in mid-west Ireland and employs over 450 people. The refinery’s infrastructure benefits from a deep-water terminal allowing for efficient delivers to European smelters.