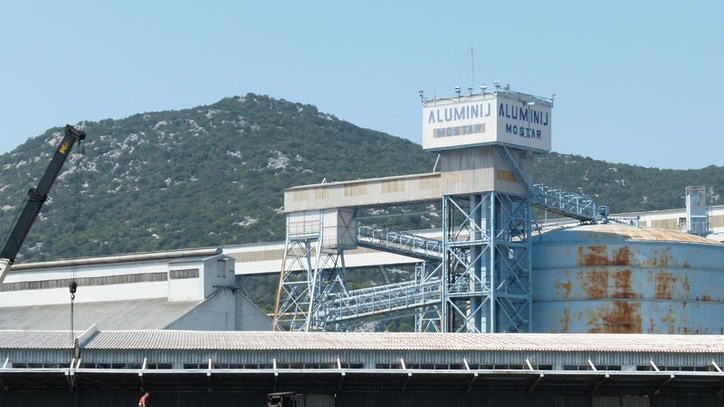 Aluminij Mostar – Bosnia’s sole aluminium smelter – is facing imminent closure in the coming days as the company failed to reach a deal with the regional government on favourable energy prices.

Earlier this week, the company’s workers organised protests blocking a motorway and demonstrating in front of the parliament in the capital Sarajevo to urge the government to save their jobs.

The top management has reportedly decided to resign in the face of the government’s unwillingness to provide financial backing to the national champion.

The debt-laded Aluminij employs around 900 workers who could now face layoffs from Monday.

Other 10,000 indirect jobs – including in the aluminium processing firms the company supplies with its metal – could be affected if no buyer comes to the rescue of Aluminij.

“It is not important for us who will be the owner, it is important to keep the jobs,” said Romeo Bioksic – head of Aluminij’s trade union.

The company has accumulated debts due to high alumina and energy costs with its current debt standing at almost 380 million Bosnian marka (143 million euros).

Three fourths of the debt is owned to the state power supplier Elektroprivreda HZHB. Aluminij is said to be paying Europe’s highest electricity price and requires government’s subsidies to stay afloat.

Earlier this month Elektroprivreda HZHB stopped delivering electricity at preferential prices and threatened to cut supplies entirely today at midnight. Aluminj has not secured supplies until Monday when talks with potential buyers resume.

The government of Bosnia’s autonomous Bonsiak-Croat Federation has a 44 per stake in the company, with small shareholders owning 44 per cent and Croatian government owning the remainder.

The regional government refused to continue subsiding company’s energy prices saying that state aid was not acceptable due to open market regulations.

“The price of electricity is formed on the electricity market and the Federation government has no mechanisms to influence it in any way,” the government said in a statement.

This week the government held talks with Glencore who would become Aluminij’s strategic investor. The commodity trade already supplies the smelter with alumina and ships around half of Aluminij’s production.

While Glencore expressed interest in restructuring the company, no deal was reached due to government’s unwillingness to guarantee fixed subsidised electricity prices. Glencore could make another offer when talks resume on Monday.

“Unfortunately, judging by their rather different views, we are not optimists and we do not hope for good news,” Alumnij said in its statement on talks with Glencore.

EGA also expressed interest in acquiring the company. However, the company plans to assess Aluminij’s value before entering talks about a possible takeover.

EGA’s representatives pledged to double the current annual output of 130,00 tonnes, negotiate a power deal and secure continuous production for up to a decade.

Aluminij Mostar was founded at the turn of the 20th century when bauxite ore deposits were discovered in the region. Once a flourishing business in Yugoslavia, Aluminij lost many of its facilities during the Bosnian war in 1992-1995.

The company rose from the ashes after the war, but constantly faced shutdown and bankruptcy threats due to debt.

Aluminij’s management tried to ensure company’s survival with an extensive plan, including new energy supply contracts and a series of investments in equipment and a new anode plan.

However, the energy cost issue remained unresolved and is now threatening the existence of what is one of the largest metals companies in the Western Balkans.