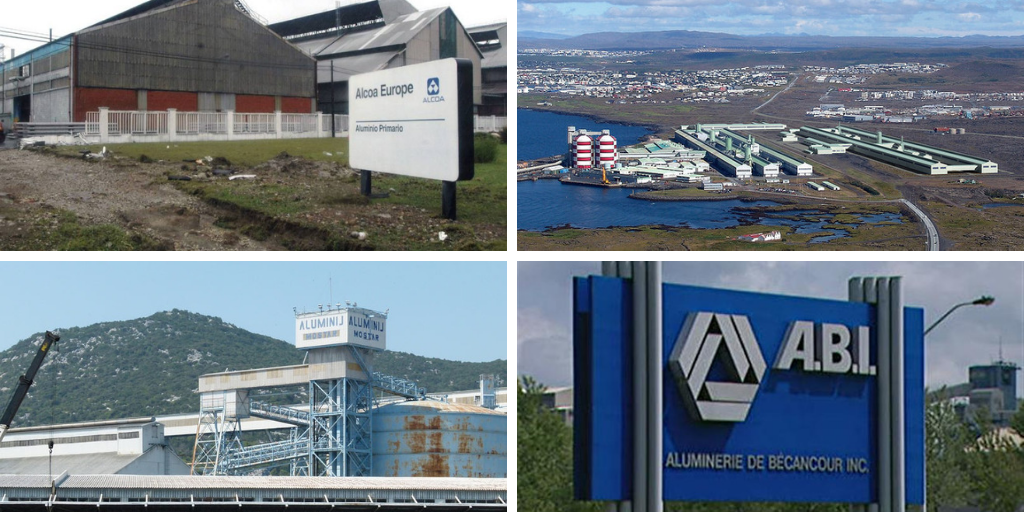 Alcoa agreed to sell its Avilés and La Coruña aluminium plants to Swiss private-equity investor Parter Capital Group. The two Spanish facilities include casthouses and a paste plant that are currently operating, and two curtailed smelters kept in restart condition. The acquisition is subject to a buyer-provided credit facility. If the deal falls through, a collective dismissal procedure will take place on August 1.

A lifeline for Span's #aluminium smelters threatened with closure? https://t.co/QtaxGHZncN

Aluminij Mostar – Bosnia’s sole aluminium smelter – is facing imminent closure as the company failed to reach a deal with the regional government on favourable energy prices. Glencore and EGA expressed their interest in the purchase of the facility, but the negotiations are taking place as the plant is threatened with energy supply disconnection due to debt.

Glencore, Trimet Aluminium and Liberty House are reportedly interested in purchasing Rio Tinto’s aluminium assets in Iceland, Sweden and the Netherlands. Rio Tinto is looking for a new buyer after Norsk Hydro pulled out last year due to EU competition concerns. Icelandic operations – running on electricity from hydropower and geothermal energy – are particularly appealing to companies seeking to boost their green credentials and secure cheaper energy sources.

Novelis Not Ready To Offer Concessions On Its Aleris Bid

Novelis is reportedly not ready to make concessions over its purchase of Aleris. The EU Commission is currently investigating Novelis’ plan to merge with Aleris due to concerns that the acquisition would weaken competition in the supply of semi-finished aluminium products and disadvantage industrial consumers in the EU. Novelis has two weeks to reply to the Commission’s concerns. The deadline for the decision is set for September 16.

Glasgow-based scaffolding manufacturer Turner Access will scale down the manufacture and supply of aluminium towers and low-level access ranges. The company intends to terminate production later this year as part of its “wider strategic decision.” Moreover, Turner Access signed an agreement with Pop Up Products to sell its aluminium access equipment business.

Jaguar Land Rover announced that the next generation XJ model will feature an all-electric powertrain and will be made in the UK amid the on-going Brexit uncertainty and falling diesel sales. JLR’s upcoming models will be fully electric or hybrid cars increasing the company’s need for aluminium products. Earlier this year the automaker launched a new closed-loop aluminium recycling initiative.

Aluminium Association of India is lobbying the Indian government to introduce higher import duties on finished aluminium claiming that domestic producers are struggling to retain competitiveness due to energy costs and coal shortages. At the same time, aluminium companies are seeking a reduction in customs duty on aluminium inputs such as caustic soda and coal tar pitch. Indian producers rely mostly on coal for their energy needs.

Central Motor Wheel of America will invest over USD110 million to expand operations at its aluminium wheel manufacturing plant in Kentucky. The plant produces wheels for passenger cars and light trucks. The planned expansion comes amid increasing demand for aluminium wheels in North America.

Australia’s Metro Mining signed a new contract with a Chinese aluminium producer to deliver 420,000 metric tonnes of bauxite ore by the end of the year. The company did not disclose the buyer’s identity nor the price, but the bauxite ore is destined for refineries in Shanxi. The contract means that Metro now sold 90 per cent of this year’s planned production totalling 3.3-3.5 million metric tonnes.

Workers at Aluminerie de Bécancour in Quebec will go back to work after a months-long labour dispute with owner Alcoa. The workers accepted Alcoa’s final offer amid threats of final closure of the plant. The smelter is expected to be fully operational by the second quarter of the coming year.

Aluminium 3D printing sector got a boost with two developments in Europe and Canada. Swedish Gränges signed a memorandum of understanding with Australian metal 3D printing company Aurora Labs. Gränges plans to purchase a printer and propriety aluminium powder and collaborate with Aurora on R&D. In Canada, on the other hand, precision machining company Apollo Machine & Welding received a grant from the Canadian government to develop large-scale 3D printing technology.

Australian Aurora and Swedish Gränges to collaborate on the use of 3D printed #aluminium in the automotive industry https://t.co/xm97nzCHWF

Constellium celebrated its business and sustainability achievements in its newly released report. The company highlighted employee engagement, sustainable purchasing, Aluminium Stewardship Initiative certifications, and customer satisfactions among its biggest achievements in sustainable production. The rolled and extruded aluminium producer said it would now focus on energy efficiency and landfill waste to continue to grow responsibly.

In 2018 we improved our carbon footprint 👣 & continue to focus our efforts on all potential energy-saving opportunities to reach our 2020 #energyefficiency goal 🌎 Read more 👉 https://t.co/vlh6Gabq6Z#FutureInside pic.twitter.com/arSW5SghWZ