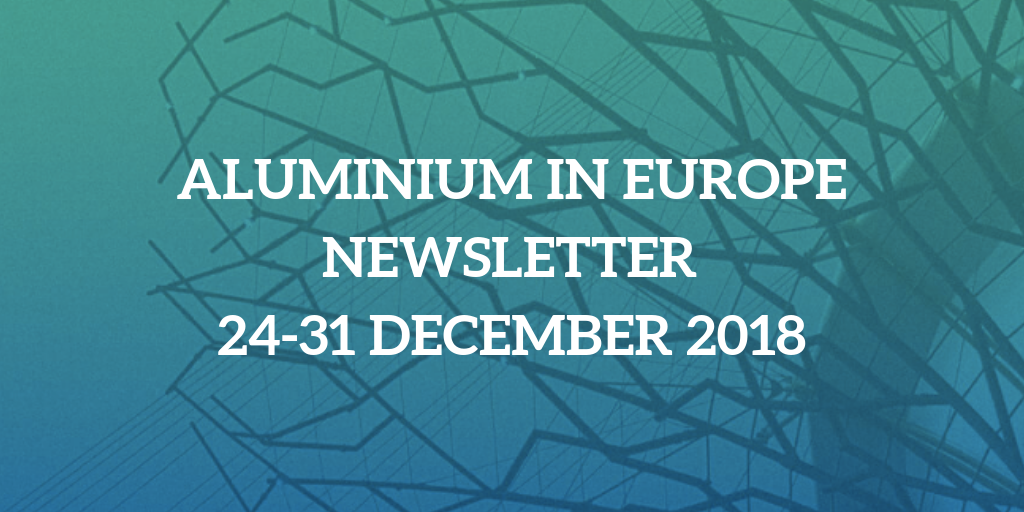 As part of the corporate restructuring agreement with the U.S. Treasury in order to lift sanctions, Rusal appointed Jean-Pierre Thomas as the company’s new chairman. Thomas, who starts his mandate from January 1st, has been Rusal’s independent non-executive director since June, having previously served as a non-executive independent director of Recyclex – a French metals producer. Thomas replaces outgoing director Matthias Warning, who resigned after six years of leading the world’s second largest aluminium producer. The agreement between Rusal and the US Treasury is subject to review by the U.S. Congress.

Who is Jean-Pierre Thomas – #Rusal's new board chairman? https://t.co/RTvnzaiboq pic.twitter.com/7s2j8sEJGS

Emirates Global Aluminium signed an agreement with the Emirates Scientists Council (ESC) opening the doors of the company’s nine laboratories to ESC scientists to conduct research. The agreement is part of the “Open Labs” initiative that aims to provide UAE researchers with access to the most advanced technology in the country and foster a culture of innovation in the context of private-public collaboration.

Liberty Sets Its Sights On The Middle East

After the successful acquisition of the Aluminium Dunkerque from Rio Tinto in France, the UK-based Liberty House plans to expand into the Middle East with a purchase in the UAE. The company expects to make an announcement about its planned presence in the Middle East in the coming year. The conglomerate has been enthusiastically purchasing steel assets around the world and has recently started to show greater interest in aluminium.

Aluminium Bahrain Starts The Biggest Furnace In Its History

Aluminium Bahrain – Alba – unveiled its historic furnace with total design value-added capacity of 530,000 tonne per year. The structure is part of Alba’s Line 6 Expansion Project that is designed to make Alba the world’s largest aluminium smelter.

Alba started the biggest #furnace in its #history with the First Cold Charge of Furnace 3 in its new #Casthouse 4 on 26 December 2018 https://t.co/T7vY2AZMYU pic.twitter.com/eOFPCSXcXZ

Turkey Expects Abolition Of US Tariffs

The Turkish government is expecting the US to remove additional tariffs on steel and aluminium imports that the Trump administration imposed in August during a diplomatic dispute between the two countries over an American pastor. At the time, President Trump ordered a doubling of the Section 232 tariffs on Turkey.

While Novelis executives maintain that the company has largely avoided negative impacts from the Section 232 tariffs, they still plan to petition the U.S. government for exemptions on certain aluminium shipments. While experiencing strong demand for aluminium, the company’s representatives added: “with a higher tariff that’s going to mean higher prices to our customers and end consumers.”

India’s Commerce Ministry voiced support for increasing import duties on primary and scrap aluminium entering the country. Union Minister Suresh Prabhu claimed that the proposal would protect domestic producers who had complained to the government about alleged dumping of raw aluminium in India by foreign manufacturers. However, the Indian downstream aluminium industry, in a letter to the Minister, opposed import hikes by arguing that the move would hurt the country’s SMEs at the time when the domestic supply chains remain inadequate.

Maintenance work at two Chinese plants is set to negatively impact alumina production numbers in the country, reports Shanghai Metals Market. Due to the market turmoil this year, China became an exporter of alumina instead of consuming its entire alumina production domestically. However, China’s alumina exports fell sharply in November after alumina prices dropped by nearly 17 per cent thanks to the resolution of the Alcoa strike and the Alunorte production cuts. China also announced last week that the countries would limit imports of scrap aluminium and steel in July 2019 to promote domestic recycling.